[ The Korea Herald – Send E-mail ]
After centuries, Bethlehem church to get new roof
By Shin Hae-in
Published : Nov 27, 2011 - 21:19
Updated : Nov 27, 2011 - 21:19
BETHLEHEM, West Bank (AP) -- Preparations for a long-needed renovation of the 1,500-year-old Church of the Nativity are moving ahead in Bethlehem, the town of Jesus’ birth, in the face of political and religious conflicts that have kept one of Christendom’s holiest sites in a state of decay for centuries.

The first and most urgent part of the renovation, initiated by the Palestinian government in the West Bank, is meant to replace the building’s roof. Ancient wooden beams pose a danger to visitors, officials say, and leaks have already ruined many of the church’s priceless mosaics and paintings.

If the repairs go ahead as planned next year, it will be the first time the crumbling basilica has seen major renovation work in more than a century and a half.

Altering a building like the Church of the Nativity, built 1,500 years ago on the site of a church 200 years older than that, is never a simple affair. The building is shared by three Christian sects -- Catholics, Greek Orthodox and Armenians -- who have traditionally viewed each other with suspicion and are wary of upsetting the brittle status quo that governs the site.

To repair a part of the church is to own it, according to accepted practice, meaning that letting other sects undertake renovations or pay for them could allow one to gain ground at another’s expense.

The resulting paralysis and disrepair has been a recurring theme at the church.

“In the roof the timbers which were constructed in ancient times are rotting, and this structure is falling daily into ruin,” wrote one visitor. That was in 1461. 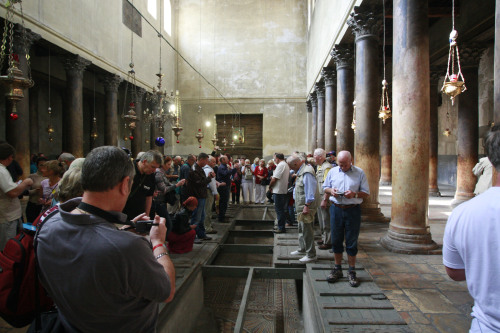 Pilgrims and tourists visit the Church of the Nativity, believed by many to be the birthplace of Jesus Christ, in the West Bank city of Bethlehem. (AP-Yonhap News)
Some measure of the complications involved in a renovation of this type can be found in the Nativity’s similarly ancient and fractious sister church, the Holy Sepulcher in Jerusalem. When a 1927 earthquake badly damaged that building, it took the rival sects more than three decades to agree to major repairs and another three to complete them.

Today, the increasingly dire state of the Nativity’s roof and the intervention of an external player in the form of the Palestinian Authority -- which has circumvented the old rivalries and allowed all to save face -- has led the three churches to agree to a renovation to be arranged and funded by the Palestinian government and international donors.

The Palestinian Authority, the Western-backed government that wields limited control in the West Bank under Israel’s overall control, sees the church as its premier tourist attraction, with 2 million foreign visitors last year.

The PA and its president, Mahmoud Abbas, are eager to win recognition for the basilica from UNESCO as a world heritage site, but an earlier application was not accepted because UNESCO did not consider the Palestinian government a state. That changed last month, when, in a controversial decision that triggered a funding cutoff by the United States, the U.N.’s cultural arm decided to grant recognition.

The Palestinians are now hoping their application will be approved. The renovation is motivated, in part, by a desire on their part to prove they are responsible stewards of sites of global importance.

”Our president has issued a decree to restore the roof and to prepare for the restoration of the church on behalf of the three churches and in coordination with the three churches, which obviously cannot do it on their own,” said Khouloud Daibes, the Palestinian tourism minister.

A high-tech survey by experts from Canada, Italy and elsewhere ended earlier this year. Palestinian officials hope the three churches will sign off on the plans and that the renovation itself will begin in 2012. It is expected to cost between $10 and $15 million.

The roof is in such poor condition that there is a “risk of collapsing beams within the wooden structure which could hurt people inside the church,” said Issam Juha of the Centre for Cultural Heritage Preservation, one of the official Palestinian bodies in charge of the UNESCO application.

“We recognize that this is a necessity that goes beyond our different claims, and that this has to be done,” said Father Athanasius, the Roman Catholic clergyman in charge of relations with other sects at shared sites in the Holy Land.