The company has invited more than 50 dealers from China to introduce the Korean headquarters’ management philosophy and future development strategies in detail.

The dealers from Beijing Hyundai Corp. are scheduled to visit a Hyundai Steel factory, an affiliate of the carmaker and participate in Korean cultural events until this Sunday.

The company and the dealers have agreed to coordinate more closely to provide Chinese customers with the best-quality services and products.

In China, Hyundai Motor Group, which includes Kia Motors, has broken ground for a new engine factory as the automobile giant seeks to expand into Asia’s largest market.

Hyundai Wia Corporation Corp., a member of the automotive group and the second-biggest automotive parts manufacturer in Korea, said it started work on the $270 million (310.5 billion won) engine factory this month on the east coast of China. 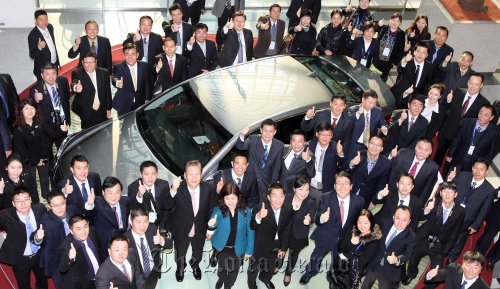 A group of Chinese dealers for Hyundai Motor vehicles pose at the automaker’s headquarters in Yangjae-dong, southern Seoul, on Friday. (Hyundai Motor)
“The plant in the city of Rizhao in Shandong province will increase engine capacity to 600,000 units per annum from the current 400,000 units,” a group spokesman said.

Output at the company’s third engine factory in China is expected to start in 2013. Engines produced there will be delivered to Hyundai factories in Russia and affiliate Kia Motors’ Chinese production lines.

Rizhao has been a stronghold for the group’s Chinese operations. The automotive group operates two engine factories, two automotive casting factories and one module factory in the city.

They together produce engines and other parts worth more than $785 million annually.

Hyundai Motor and Kia Motors ranked No. 2 in their combined sales of small vehicles in China during the first nine months of 2011, automotive data showed.

The two carmakers saw their ranking climb by four notches on a year-on-year basis by grabbing 10.9 percent of the Chinese market. They placed sixth during the same period last year.

The data showed that Hyundai-Kia sold a combined 162,472 units in the compact car segment between January and September.

The companies saw their sales jump 52.2 percent on a yearly basis and overtake Volkswagen, which ranked third with sales of 154,582 units. General Motors topped the list by selling 191,626 units.