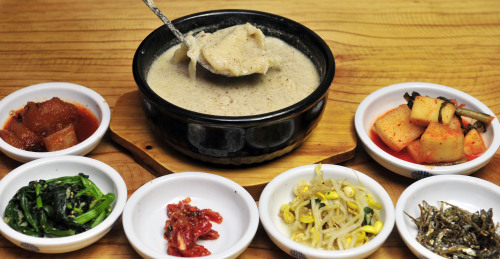 At Jang Sarang, unhulled and hulled ground perilla seeds are used to give the thick broth of their deulkkae sujebi its nutty, rich flavors, and leeks are used to create green dough flakes in addition to the standard white ones. Served up hot, the sujebi comes with a wide variety of tasty banchan (Kim Myung-sub/The Korea Herald)
Perilla seeds bring robust flavors to classic hand-torn noodle soup


Perilla (“deulkkae”) ― like the more widely known sesame seed ― is chock-full of nutty, toasty flavors that are both robust and delicate, making it a go-to ingredient in the vast lexicon of Korean cooking.

Flavor is not the sole impetus behind the consumption of perilla.

Perilla is also known to possess various health-giving nutrients, including an abundance of omega-3 fatty acids ― which are said to lower cholesterol ― in the seeds.

The Rural Development Adminstration also released findings that the seed and its leaves are rich in rosmarinic acid and luteolin, both of which are said to inhibit the production of melanin pigments and thereby help skin stay free of age spots.

“Wholesome” and “tasty” are the words, then, that spring to mind when you say “perilla,” and perhaps that is why many restaurants throughout the nation incorporate the prized ingredient into their menus.

Given the versatile nature of the seed and its leaves, both can be found most anywhere, in cocktails, for instance, or, more commonly, in “banchan” (side dishes) and with grilled meat.

Perilla seeds also go great in soups, and can even service a main dish, like “sujebi.”

A classic Korean soup, sujebi is a simple, hearty dish, great for cold winter months. Like its cousin, kalguksu (hand-cut noodle soup), it is a pasta-and-broth-style combo, except, instead of noodles, hand-torn shards of dough are tossed in.

Those chewy, bumpy bits of dough are what make this dish compatible with perilla seeds.

Perilla seed-based broths tend to be thick and porridge-like in consistency and those oblong shards of dough hold up well against that weighty soup, not just because the dough has heft, but also because the tasty, rich liquid just puddles up into the dough’s slightly crater-like grooves, giving maximum flavor per inch.

Given how it is made ― by hand ― those shards of dough will vary in size, girth and texture, depending on who makes it.

“We developed it that way for the thick, perilla seed soup.”

Located near Seoul’s Mount Acha, Sodahmgol spins out a big-hearted rendition of the dish, using hulled, ground perilla seeds to impart a smooth texture to their generously-portioned soup.

One massive bowl of sujebi, flecked with carrot and zucchini, costs a reasonable 6,000 won and comes with “geotjeori” (fresh kimchi) and “yeolmu” (young radish) kimchi.

A small bowl of barley rice is also provided to tide one over till the soup, which is boiled to order, arrives. 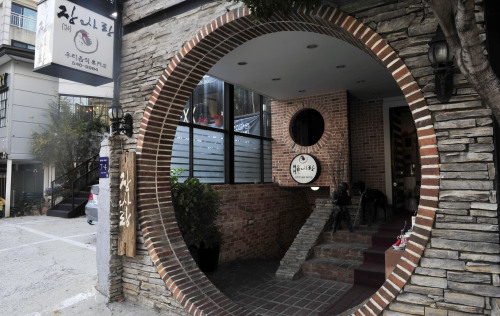 “Leeks go into the sujebi dough,” said manager Jin Hae-yeon, explaining why some of the thick, chewy dough flakes are green.

As for the broth, which is rich and flavorful, both hulled and unhulled ground seeds give the soup its brown-flecked hue and its textured, satiating nuttiness.

Served up hot and bubbling, the sujebi comes with a wide variety of delicious banchan, and instead of water, a kettle of barley tea awaits the thirsty patron.

Opening hours are from 11:30 a.m. to 9 p.m. daily. Sodahmgol is closed every second and fourth Monday of the month. Deulkkae sujebi costs 6,000 won.

To get there go to Achasan Subway Station Line 5, Exit 2. Walk straight to the SK energy gas station. Turn left and walk straight for approximately six blocks. Sodahmgol will be on the right.