The auto sector is regarded as one of the few local industries to greatly benefit from the Korea-U.S. Free Trade Agreement.

The FTA, which was recently ratified by both countries’ legislative bodies, is widely expected to push up Korean carmakers’ position in the world’s largest auto market.

Experts predict that about 5,000 small and mid-sized Korean auto parts manufacturers will be able to expand their presence in the United States once the existing 4 percent tariff on vehicle components is abolished under the deal.

Tariffs on Korean-made auto parts will be lifted immediately when the trade pact takes effect on Jan. 1.

Carmakers, such as Hyundai Motor Co. and Kia Motors Corp., will also enjoy the removal of the 2.5 percent tariff on cars within four years of the pact coming into effect.

The Korea Automobile Manufacturers Association welcomed the FTA ratification in a statement on Tuesday.

The organization said the trade pact would be helpful not only for boosting exports to North America but also sales in other major markets by increasing global recognition of Korean auto brands.

“If Korean carmakers’ brand image is upgraded from the expected sales growth in the U.S. under the pact, exports to other markets including the BRICS (Brazil, Russia, India, China and South Africa) will also increase,” the KAMA forecast.

In the U.S., Hyundai Motor sold about 7.13 million units in the past 25 years and Kia Motors’ sales came to about 3.68 million units over 17 years.

Hyundai, which was established in 1967 and made its first exports in 1976 to Ecuador with the Pony sedan, finally entered the U.S. market in 1986.

Kia, before it was acquired by Hyundai in 1998, launched its U.S. campaign with exports of the Sephia sedan in 1994. 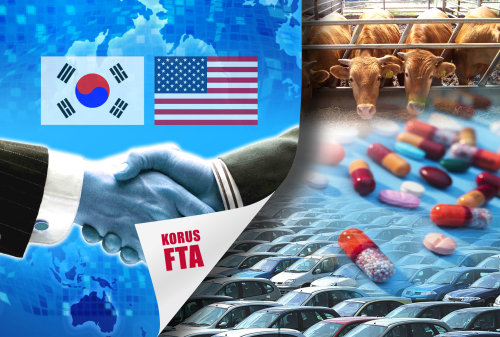 They have long expressed uneasiness about the trade imbalance in the auto sector.

Tariffs on American cars will be lowered from the current 8 percent to 4 percent when the pact is implemented. The 4 percent tariff will be removed in four years.

While General Motors ― via its Korean subsidiary GM Korea ― has been successful in capturing nearly 10 percent of the local market through its Korean factories, Ford Motor and Chrysler are seeking to emerge as major import brands in Korea under the FTA.

Many Koreans want to see price competition between Hyundai-Kia and import brands as their choice has long been restricted due to the high prices of import vehicles.

Meanwhile, Korea’s compromises on auto clauses in the FTA renegotiation last year are unlikely to have a significant impact on domestic carmakers, analysts said.

Seoul backed down on several auto regulations in the trade ministers’ meeting.

Though the concession invited domestic criticism from the opposition parties and civic groups, industry experts say that the resulting damage to the domestic industry will be limited.

“I don’t think the changes will have any significant effect as localization (of Korean carmakers in the U.S.) is well established, and parts also don’t present much of a problem as import volume from the U.S. is not large,” Tong Yang Securities analyst Ahn Sang-jun said.

“Much of the negotiating seems to be a pretext. I can’t see the problem. In contrast I think it will bring more freedom and promote facilities investment.”

With both plants capable of producing 300,000 units per year each, the two Korean carmakers still have room to increase the proportion of their U.S. sales accounted for by vehicles produced in the country.

The Korean side conceded to putting a cap on customs refunds on automobile parts that are imported and used in exported vehicles at 5 percent.

Unlike Korea’s trade pact with the E.U., such a clause was not included in the original Korea-U.S. FTA.

While the change may not deal significant damage to local carmakers, U.S. carmakers may stand to gain from Seoul’s backtracking on environmental regulations.

According to reports, Seoul is reviewing the exemption of up to 10,000 vehicles each year from the new fuel economy and greenhouse gas emission standards that will go into effect in 2015. Korea had originally intended to exempt brands with an annual sales figure of less than 1,000 units from the new rules.

From 2015, vehicles able to seat 10 or fewer people will be required to either meet the 17 kilometers per liter fuel economy standard or emit less than 140 grams of carbon dioxide per kilometer.