The English professor in Gangwon Province, who is originally from Canada, aims to cycle from Alaska to Argentina in three 60-day expeditions over the next two years.

The 38-year-old who lives in Gangneung with his Korean wife and their two children plans to ride the first leg from Anchorage in the U.S. state of Alaska, via the Canadian Arctic to Vancouver, British Columbia, next summer.

He will then use his summer vacation of 2013 to ride from the Canadian city to Panama in Central America before returning the following year to sail across the Darien gap to Colombia. He will then pedal his way to end up in Ushuaia at the tip of Argentina, considered the southernmost city in the world.

Cash raised through his efforts will go toward the Intestinal Disease Education and Awareness Society, a Canadian charity which supports kids and young adults living with intestinal disease, an ailment that Perich’s brother also suffers from.

“The work we do is about finding quality of life,” explained IDEAS founder Rob Hill, who has climbed seven of the world’s highest mountains in spite of suffering from intestinal disease himself.

“Brian shows that with dreams, a sense of adventure and that a passion for a cause can change not just your own life but the lives of any and everyone you can touch with your story.” 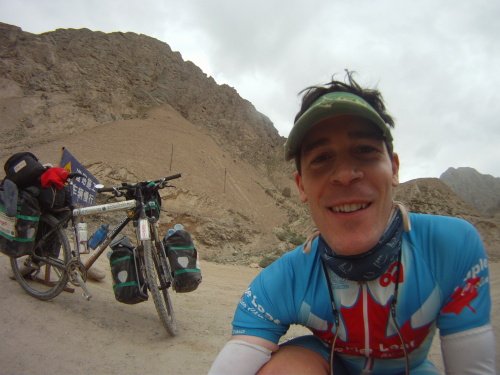 Cyclist Brian Perich takes a break while cycling in the northern Himalayas this summer. (Brian Perich)
Perich is also cycling in support of Education Through Expeditions, a U.K.-based non-profit company that connects explorers and scientists with schools.

To train for his epic trip, he took a 30-day 3,200 km cycle through China this summer, averaging 80-100 km a day. The Ontario native traveled through western China’s Xinjiang Uyghur Autonomous Region as well as Sichuan and Yunnan Provinces by bike.

He cycled over the Borohoro ranges of the Tian Shan mountains before crossing the Tarim Desert Highway cutting through the Taklamakan Desert. Later, he rode on the southern Silk Road before pedaling toward the Himalayas. Not to be stopped short after being blocked by the Chinese military checkpoints around Tibet, he then flew to Sichuan to ride 1,500 km along the Tibetan border of Sichuan and Yunnan Provinces.

“The expedition was amazing, challenging and at times extremely dangerous,” Perich said, adding that he endured landslides and “the worst roads of my 20-year cycling career,” riding over dirt tracks, through tunnels of up to 3 km in length while narrowly dodging trucks, and free-riding along the Himalayas without guardrails.

“At times there were no roads, just ponds or rivers flowing through them, and quite often the roads had no names, only numbers,” he said.

But the experience has only made him keener to take on his next challenge of cycling the length of the two American continents in three stages.

He said that his biggest anxieties for the summer trip that will take in Alaska, the Yukon and Northwest Territories before ending in British Columbia are the wildlife ― think grizzly bears ― and carrying enough food supplies.

“In China I carried a lot of equipment and extra clothing ― what you bring for the geographical area ― but I didn’t carry much food,” he said, recalling that pre-training and this summer’s trip caused his bodyweight to drop from 95 kg to 70 kg.

In spite of the hardships, he recalled good times in China such as sharing yak’s milk with locals ― as well as a Chinese tonic to remedy some explosive diarrhea which threatened to render his meager food supplies defunct while on the road.

And he always found time for some pleasant relaxation, whether it be bedding down at a mining camp near the Himalayas or rolling out a survival blanket for a nap in the desert.

“The time spent out on expeditions for me is very easy,” said Perich, who has lived in Korea for the past five years. “You become so involved in the whole experience that it is like home, except that I miss my wife and kids.”

And he said that life in Korea had fueled his passion for cycling.

“South Korea also hosts an incredible mountain terrain with long coastlines, all of this geography is ideal for adventure cyclists to get their start with bicycle touring,” he said.

Perich blogs about his cycling adventures on the Korean-World adventure blog: Korean-world.blogspot.com.

For more information or to donate to the organizations he will support, go to nogutsknowglory.com and www.etelive.org.