At a Swiss-Korean Business Council event on Monday, Swiss State Secretary for Economic Affairs Marie-Gabrielle Ineichen-Fleisch praised the two countries’ economic relations during the five years following the enforcement of the EFTA/Swiss-Korea Free Trade Agreement in 2006. 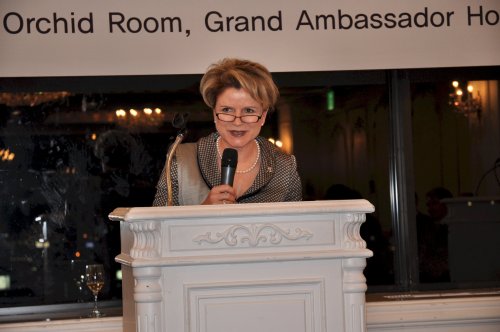 Swiss State Secretary for Economic Affairs Marie-Gabrielle Ineichen-Fleisch (Yoav Cerralbo/The Korea Herald)
“The FTA has been very beneficial for our economic interests and to further deepen trade and investment flows between our two countries,” Ineichen-Fleisch said in her speech.

Bilateral trade between European Free Trade Association members and Korea has grown from $3.9 billion in 2006 to $9.2 billion in 2010 , according to the Korea International Trade Association. The EFTA is an intergovernmental organization that promotes free trade for its member states of Switzerland, Iceland, Liechtenstein and Norway.

“For the last five years the size of bilateral trade has grown at a surprising rate,” said Korean Deputy Minister for Foreign Affairs and Trade Choi Seok-Young, who also spoke at Monday’s event in Seoul.

“Exports and imports between Korean and EFTA members have grown three times for the last five years,” he added.

However, he said that Korea still received a higher volume of imports from Switzerland than it exports to the prosperous European country with a population of 7.6 million people.

Korean companies exported $369 million of goods to Switzerland in 2010, with high value trade items including automobiles, mobile phones and gold. However, the country imported $2 billion of Swiss goods including medical supplies, gold and watches.

In the same period, Korea invested $221 million in Switzerland and Swiss investments to Korea amounted to $1.7 billion.

Choi said that Korean exports to Switzerland had increased by 36 percent since 2005, the year before the bilateral free trade agreement. Swiss exports grew 72 percent in the same period.

And he added: “Since the EFTA agreement, Korea’s outbound investment to Switzerland grew by 152 percent and Swiss investment to Korea grew by 37 percent.”

He emphasized the importance expanding the volume of two-way trade and investments, as well as calling for better communication and cooperation between both countries to build on the good groundwork already laid.

“I hope that both countries should make a best endeavor to have more expanded and balanced trade and build up trust as one of the goals we have to pursue together,” he added.

Ineichen-Fleisch conceded that when it came to trade “the balance is in favor of EFTA and also in particular strongly in favor of Switzerland,” but said that Korea also benefited from the trade pact.

“The figures seem somewhat misleading,” she said. “We certainly import much more Korean cars and electronics than reflected in these figures. We see more and more Hyundai and Kia cars in our streets, Samsung and LG TVs in our homes and Korean mobile and smart phones everywhere.”

She said that both Korea and Switzerland’s export oriented economies shared a common interest in fighting protectionism, working to ensure stable world market conditions and cooperating on industrial research and development.

Of her exchanges with Korean officials she said: “In many respects we are like-minded, share interests and have good reason to cooperate together.”

Ineichen-Fleisch was accompanied on her two-day trip to Korea by a delegation including representatives from Swiss companies and business associations the OSEC, Economiesuisse, and the Swiss-Asian Chamber of Commerce.

A new memorandum of understanding was signed in her presence to cement the relationship between the two nations’ trade promotion agencies, the Swiss OSEC, and Korea Trade-Investment Promotion Agency.