For some embassies, it was a good year selling most or all of their products with the profits going to charities in Korea.

For others, it was a year that did not bear much fruit despite the amount of labor they put into making it a success.

Dressed in traditional dress, the women of the Nordic Club sold out of all their homemade bread, chocolates, Christmas decorations and candles.

The only things remaining were a few boxes of rye crisps, some candy and a couple of packages of coffee.

“It’s been very crowded since the morning. We sold quite a lot,” said Ritva Wuoristo, wife of the Finnish ambassador.

On the other side of the room, the Kenyan Embassy was not so lucky, their tables full with goods and jewelry waiting to be bought.

“There are no sales this year. The place is virtually empty. Compared to last year, there are fewer people,” said Monicah Wangari Ngovi, wife of the Kenyan ambassador.

“Last year we donated close to a million won to charity; this year, nothing. Once you remove the cost, the transportation to Korea, the overhead, we will lose,” she added. 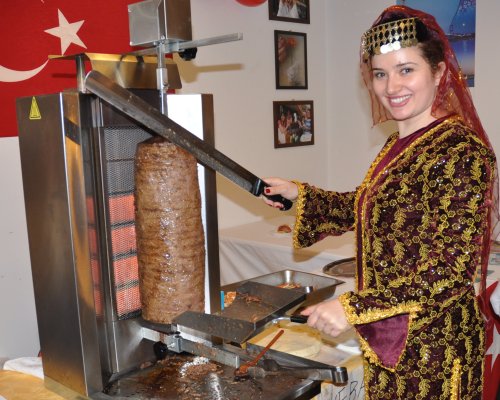 Mostapha also lost money this year but the sting for her is greater because the ambassadorial couple will be leaving Korea next week for another assignment which means that the products that she purchased with her own money will not be able to be sold at next year’s bazaar.

Jewelry and wine were always popular items at her booth plus she would run an extra booth selling traditional Lebanese food.

“Swarmas are also big sellers but this year I hardly sold anything and I brought the same amount I’ve brought with me in the past,” she said.

By the end of the day, she was left with half of what she was hoping to sell, destined for the trash.

Mostapha attributes the lack of success to the poor economic climate and the fact that the event was held on a Tuesday.

“If it’s done during the week then it attracts less people, I’ve always said that we should do it during the weekend but the problem is that many of the wives would have to pay overtime to their helpers,” she said.

“There are a lot of NGOs and they didn’t advertise as well,” Mostapha added.

On the opposite end of the spectrum, the New Zealand Embassy did quite well by selling most of their products.

“Most of our stuff sold faster than last year but for the past three years we’ve had similar merchandise so people know to come here for certain things,” said Michelle Mann, wife of the New Zealand ambassador who will also be finishing his tenure in the coming weeks.

“We got a rush soon after it opened. The sales have been good and steady, we’ve sold most of our merchandise by midday, so we’ve been really happy,” Mann said.

“There was a good balance of Koreans and international visitors.”

While the figures for this year are still being calculated, the charity bazaar has collected close to 2 billion won in its 32-year history.

“What’s exciting is that you can get anything here from maple syrup from Canada to Iranian handicrafts which there are not many places in the world where you can buy those right now,” said SIWA president Terri Hartman.