Despite the cold weather, a group of ambassadors to Korea gathered at Jongno-gu Office, excited to start their first group tour in central Seoul.

The cultural tour was organized by Jongno-gu and the Korea Tourism Organization to promote “responsible tourism,” which the district office newly introduced to tap sustainable tourism.

“Jongno district, one out of 24 districts in Seoul, is home to major palaces. You’re going to see a few select places ― a palace, traditional Korean houses in Bukchon and a historical city wall around Seoul,” Lee Charm, president of the KTO, told ambassadors at the Jongno-gu Office.

“The theme of the tour is responsible tourism. While engaging in tourism, you’re responsible as a global citizen to enjoy the environment as well as to take care of it.”

An overview of the Bukchon Hanok Village, a traditional and historical area in central Seoul. (Korea Herald file photo)
Unlike the usual familiariization tour, where high-ranking officials are ferried about in cars and buses, travel this time was on foot.

The concept of responsible tourism came as seven out of 10 Jongno residents had complained at least once about waste and noise generated by tourism in their district, while 6 million foreign tourists visit the area every year.

Changdeok Palace was the first stop on the day’s itinerary.

The palace was registered on the UNESCO World Cultural Heritage List in December 1997, meaning that it has distinctive and invaluable cultural properties which need special preservation.

Built in 1405 as a detached palace, it is considered the epitome of Korean architecture, with a distinctive palatial layout, exquisite buildings and well-known rear garden called “Biwon,” or “Secret Garden” in Korean. 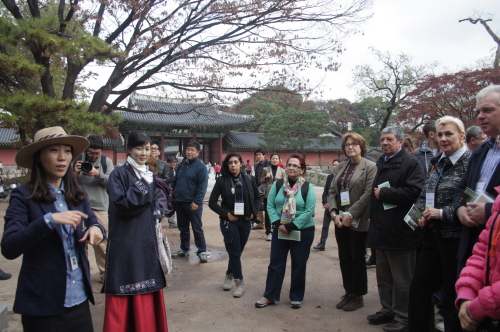 Ambassadors and other participants listen to a tour guide’s explanation about the history of Changdeok Palace in Seoul on Nov. 11. (Kim Yoon-mi/The Korea Herald)
Ambassadors had a special chance to see how sign language guides with knowledge of the palace can provide tours for visitors with hearing impairments ― both Korean and international ― part of the Jongno-gu Office’s responsible tourism efforts.

Then another guide provided an English tour service.

“The initiative (for the hearing impaired) is very nice and I think Korea can introduce this service to other countries. Maybe others will pick it up,” said Tuvia Israeli, Israel’s ambassador to Korea.

“What impressed me the most was that every part of the palace was accessible for the disabled,” he said.

Foreign envoys showed great interest when the guide began to explain about how the royal family of the Joseon Dynasty had to disappear after Korea’s forced annexation by Japan in 1910.

For some of the envoys, it was their first visit to the palace.

“It is a bit funny because it is the first time that our group of ambassadors is in a Seoul tour together, although we all live in Seoul,” Israeli said.

On a path leading from the palace up to Bukchon Hanok Village sits Chung Won San Bang, a museum of traditional Korean windows and doors, all designed by Sim Yong-sik, the government’s accredited master carpenter for doors and windows. 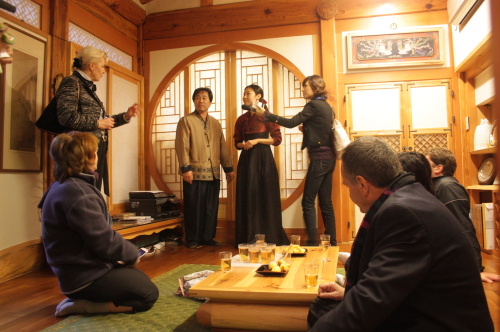 Visitors are briefed about Chung Won San Bang, a museum for traditional Korean windows and doors, inthe Bukchon Hanok Village in Seoul on Nov. 11. (Kim Yoon-mi/The Korea Herald)
After a brief tour of the house, the envoys saw how to make a miniature traditional window without using any nails.

Lengyel Miklos, the Hungarian ambassador to Korea, said he became interested in buying a traditional window for his house.

“I like these windows, especially. I would love to buy a big one for my house. If you spend four or five years in a country, it is part of your life and you want to bring home some memory,” Miklos said.

“The second reason is it is nice and beautiful. It’s a piece of art.”

After the tour around the Bukchon hanok village and dinner in Insa-dong, some of the group enjoyed a night stay at Pine Suite, a guest house in a modernized hanok, including Dominican Republic ambassador Grecia Fiordalicia Pichardo, her spouse Victor Decamps, Turkish ambassador Naci Saribas and his spouse Gulden Saribas.

A small garden in the center courtyard was accessible from right outside the room so that guests can have a group chat in the evening.

The rooms are furnished in minimalist fashion ― with just a mattress, a small desk for reading and lighting. The bathroom outside the room was clean and modern.

Gulden Saribas said the whole experience, including sleeping on the floor at the hanok, brought back memories of her childhood in Turkey.

“It created a feeling of nostalgia. I used to sleep with my big sister on the balcony or terrace, especially when there was an earthquake in Turkey,” she said, her eyes beginning to well up.

Her hometown had many pine trees and the smell of the pine trees at the hanok helped her remember her old village as well, she said.