Korea became the first country to complete a legal framework to develop a national smart grid digitally enabled to collect and act on information about the behavior of suppliers and consumers, making electricity provision more efficient and reliable.

The Cabinet on Tuesday passed the ordinances of legislation on smart grids as part of the government’s efforts to reduce carbon emissions, two months after nationwide power outages that led to the knowledge economy minister’s resignation.

The use of IT for two-way communication between power suppliers and consumers to optimize energy efficiency will be possible nationwide by 2030, according to the government’s plan.

Under the smart grid system, electricity will be charged at different rates depending on the demand and the power generation costs. For example, when consumption soars in the summer due to the use of air conditioners, costly thermal power plants will be run in addition to cost-efficient nuclear power stations. Suppliers will charge higher rates at times of high demand to discourage power use.

Consumers will be able to set washing machines to run at hours when electricity rates are cheapest and charge electric cars at low, late-night rates even when they are parked during the day. 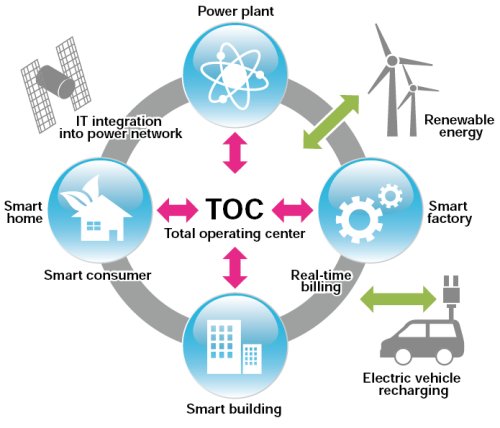 Based on the new ordinances that go into effect next Friday, the government will complete its five-year blueprint for smart grid development including investment plans by early next year. It will also designate smart grid base areas.

Businesses that wish to take part in the smart grid program such as electric car charging service providers and smart grid infrastructure builders are to sign up with the Ministry of Knowledge Economy starting next Friday.

Also participating will be companies that reduce power consumption within a building or a specific area by using smart grid equipment, resell the saved electricity and share the profits with consumers.

The government will pick companies to invest in or offer financial support for research and development to under the criteria stated in the ordinances.

According to data released by the International Energy Agency, smart-grid-related demand across the world will surpass $2.99 trillion by 2030. 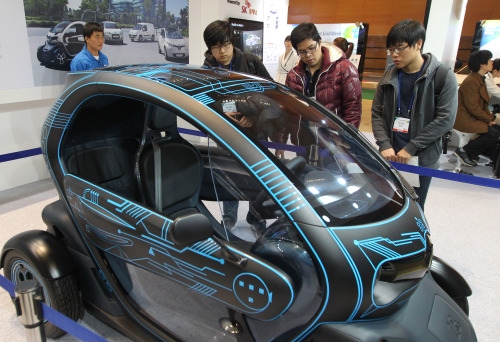 Visitors take a look at an electric car at the second Korea Smart Grid Week fair at COEX in Seoul on Wednesday. (Yonhap News)
A smart-grid consulting firm named Pike Research forecast that some 3.5 billion smart meters, or electrical meters that record electricity in intervals of an hour or less and send that information back to the utility for monitoring and billing purposes, will be installed by 2016 in the Asia Pacific region.

The electric car business is expected to grow quickly too, becoming a key driving force for smart grid development. Like Japan, Germany and China, Korea projects there to be 1 million plug-in electric vehicles in the country by 2020. The U.S. anticipates more than 1 million electric cars by 2015.

Korean companies such as LG Chem, SK Energy and Samsung SDI are prominent in battery technologies.

Hyundai Motor, after a test run of several dozen electric cars, plans to unveil an electric compact vehicle for mass production in 2015. Hyundai’s sister company Kia Motors plans to debut its own a year earlier.

“Smart” home appliances are another major wheel of the smart grid technology.

Based on the estimated electricity costs transmitted from power suppliers, users will be able control the ice-making and defrosting time on their refrigerators and check the amount of power they have consumed and the costs on a weekly or monthly basis.

LG Electronics and Samsung Electronics have already developed smart refrigerators, washing machines, ovens and vacuum cleaning robots and televisions that can be connected to smartphones and smart meters through smart servers.

Germany’s Miele was first to unveil smart-grid-ready washing machines and dryers last year. Siemens has tested energy-saving “smart watt” programs that can be installed in domestic appliances in European homes.

Korea Electronic Power Corp. has been working with IBM to prepare for its smart grid business and became the 12th member of IBM’s Global Intelligent Utility Network Coalition, a group of global electric power suppliers dedicated to further the adoption of smart energy grids.

As part of efforts to promote smart grids, the Ministry of Knowledge Economy hosted a three-day smart grid industrial fair that closes Friday.

“This year’s event will go beyond allowing consumers to experience new smart grid technologies to focus on communication for actual use and adaptation,” Koo Ja-kyun, chairman of the Korean Smart Grid Association, a group of smart grid technology developers, said in his opening speech.

“Universities must foster relevant manpower and develop contents for cooperation with industries.”