OMAHA, Nebraska (AP) -- Warren Buffett said Monday that his company has spent $10.7 billion to buy more than 5 percent of IBM's stock this year, a surprising move by the billionaire investor who has long shied away from investing in high technology companies. 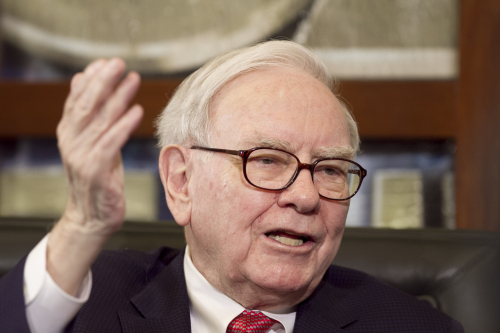 Most of the details emerged from the quarterly update Berkshire filed with regulators on its $59 billion U.S. stock portfolio. Buffett disclosed some details in interviews earlier in the day.

Monday's filing doesn't offer a full picture of Berkshire's holdings, however, because the Securities and Exchange Commission allowed the Omaha-based company to keep some of its investments confidential.

Buffett has long refused to invest in high-tech companies because he has said it's too difficult to predict which technology businesses will prosper in the long run.

But he said he recently realized his view of IBM was wrong based on what he read in the company's annual reports and what he learned by talking to information-technology departments at Berkshire subsidiaries. He said he should have realized years sooner that hardware is no longer the heart of IBM's business.

``Now they're very much a services company, and they're very intertwined with their customers,'' Buffett said. And he said IBM's customers are reluctant to change once they start working with IBM.

So Berkshire has bought about 64 million shares since March, or about 5.5 percent of IBM. Buffett says he believes IBM has a sound plan for the future.

Andy Kilpatrick, the stockbroker-author of ``Of Permanent Value, the Story of Warren Buffett,'' said it's surprising to see Buffett invest in a high-tech company, but the investment appears to be an example of Buffett spotting something in plain sight that he had previously overlooked.

International Business Machines Corp., which marked its 100-year anniversary in June, has proven resilient even in a downturn because of hard decisions it made in the 1990s, when it tapped an outsider as CEO to help with a turnaround.

At the time, IBM was slipping with the rise of cheap microprocessors and rapid changes in the industry. Although it helped make the personal computer a mainstream product, it quickly found itself outmatched in a market it helped create. PCs also began to perform many of the functions of mainframes computer, throwing IBM's main moneymaking business into disarray.

The company decided then to focus on the high-margin areas of software and technology services and move away from computer hardware. That intensified with IBM's $3.5 billion purchase of PricewaterhouseCoopers' consulting business in 2002 and the sale of its PC business to Lenovo for $1.75 billion in 2005. Today, IBM is the world's biggest technology services provider.

The shift is important because it has allowed IBM to ride two recessions. When times are tough, businesses pay IBM to help them find ways to cut costs and handle technology chores that would be more expensive to perform in-house.

Buffett said Berkshire paid an average of about $170 per share for the IBM stock.

IBM executives insist the company's focus on long-term contracts insulates it from economic swings. The company has said it is ahead of its own aggressive forecasts. IBM has disclosed a goal of hitting $20 per share in adjusted earnings by 2015, a rare example of a long-term earnings target made public by a major company. IBM, which is based in Armonk, New York, says it plans to continue growing its software business and invest about $20 billion in acquisitions from 2011 to 2015.

The third-quarter report filed Monday doesn't include all of Berkshire's new IBM stake because Buffett said some of the shares were bought in the fourth quarter.

But those other new investments, besides IBM, were worth less than $200 million at the end of September. That dollar figure suggests those investments were made by Berkshire's new investment manager Todd Combs, who manages between $1 billion and $3 billion.

It's not clear who picked the investments because the filing doesn't differentiate between investments Berkshire makes, investments any of roughly 80 subsidiaries make, or investments made by Buffett himself.

Besides the new investments, Berkshire also reported changes in some of its other holdings, including:

_ Increasing its sizeable stake in Wells Fargo to 361.4 million shares from 352.3 million in June.

_ Reducing its holdings of Kraft Foods to 89.7 million shares from 99.5 million.

_ Boosting its Dollar General stake to 4.5 million shares from 1.5 million.

_ Increasing its stake in insurer Torchmark Corp. to 4.2 million shares from 2.8 million.

Berkshire's investments are closely watched in the market because of Buffett's successful record. Buffett has said that Berkshire has been buying aggressively during the recent market turmoil.

Berkshire occasionally receives permission from the SEC to delay disclosing some stock purchases to prevent others from driving up the price of those stocks before Berkshire completes its purchases. Berkshire then discloses the purchases or sales in a subsequent quarter and issues amended reports for previous quarters.

The SEC says it grants such confidentiality to investment managers only when they can show they would be harmed substantially by immediate disclosure.
<한글 기사>