This is the second of a series of articles on up-and-coming Korean filmmakers. ― Ed.

Just about 30 minutes before the interview, director Yang Hyo-joo sends an SMS.

“There is a wall on the second floor of the cafe,” it says. “I’m hiding right behind it.”

Stepping into the busy cafe in Hannam-dong, southern Seoul, there indeed is a gray wall. The 25-year-old is totally drawn into her own thoughts behind the wall, jotting something down in her notepad, using her bright-yellow LAMY pen. She almost looks like a diligent high school girl doing her homework, except four cigarettes are sitting disfigured in her ashtray.

“These are some ideas for my upcoming scripts,” says Yang, who can be easily viewed as the “hidden gem” of Korea’s film scene unexpectedly discovered this year, as she quickly puts her notepad away. At a glance, it seems completely filled with her small, surprisingly delicate-looking handwriting. She refuses to share the notepad, with an impish smile. “No, you can’t see it!”

It has been an eventful year for Yang, who was only a final-year student at Korea National School of Arts’ film program in February when she won the silver bear prize at Berlinale with her short film “Broken Night.” The film was her final-year school project.

Yet Yang describes such early success as “poisonous,” especially when is at a stage where she is preparing for a feature debut.

“I’ve shown how much I am capable of as a storyteller with a 20-minute piece,” she says. “Now I have to prove that I can do the same with a two-hour film. I try to be cautious when dealing with my accomplishments. I try to do the same with my personal wounds and struggles. I try not to get too drawn by them.” 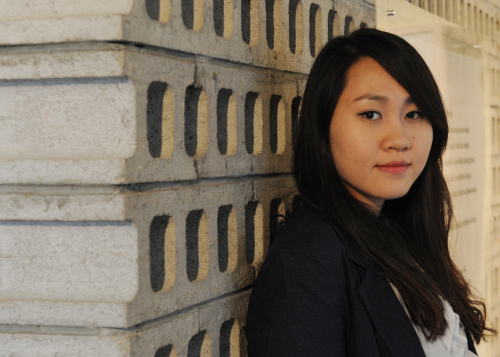 Director Yang Hyo-joo (Lee Sang-sub/The Korea Herald)
The young director fondly remembers her first year of university, when she still had no idea she wanted to become a film director. This was two years before Yang decided to transfer to KNUA’s film program. Majoring in political science and international studies, she had no interest in attending her classes, and hardly went to one. Instead, she would meet up with her “artsy” friends whom she met online, and spend time with them as much as possible. “We called our group ‘Ecstasy,’” she says.

Yang and her friends would start their days by watching morning movies at CGV Gangbyeon, enjoy free exhibitions and indie band concerts, and carry cheap cans of beer to Gyeongbok Palace and drink there until they got kicked out by the security. It was during this period when Yang watched late director Kim Ki-young’s 1960 masterpiece “The Housemaid,” and eventually made a decision to apply for a film school.

Those times were a huge transition from her high school years, as well. Yang remembers writing down “owner of a flower shop” as her dream job during her final year of high school, without a particular reason. “My teacher told me I was crazy,” she says. “My grades weren’t so bad at all, so I guess he wanted to hear something like I wanted to be a doctor or a diplomat.”

At the time, Yang had piercings on her eyebrows, ears, nose, lips, and her tongue. She managed to hide them by wearing invisible jewelry at school. Contrary to what her piercings would suggest, she would very often pull all-nighters studying for her exams or quizzes.

“I studied very hard because you get the attention you want by getting the top grades,” she says. “I liked being different, and I liked getting attention. I think those piercings and getting good grades came from the same desire ― to get recognized and noticed.”

Such qualities show when she talks about what she wants to accomplish in the future. Yang wants to make commercial films, regardless of how much she’ll have to compromise herself as a director. “Regardless of what people would think of my future works ― whether they’d think it is good or bad, I want my works to be shown to as many people as possible,” she says. “That’s what I want the most among everything else.”

Yang also has her dark and reflective side. Reading over her Twitter account, one discovers a quirky, brilliant writer who shares her random accounts of bizarre moments and dark dreams in a very visual language. She also bursts into tears a lot. “I cry when I meet a friend whom I haven’t seen for a long time,” she says. “I realize I can be often dark, quiet and introverted, and it makes an interesting combination with my yearning for recognition and attention.”

There is an old photograph of Yang that her parents still fondly keep to this day. “It’s a group photo of my elementary school class, when I was in my first or second grade,” she says. “In the photo, I am the only one who is raising her hand, desperate to answer something, while everyone else is studying hard with their heads buried in their books.

“I think the photo explains the essence of myself,” Yang says.