Hyundai, which was established in 1967 and experienced first exported of the Pony sedan in 1976 to Ecuador, finally entered the U.S. market in 1986. 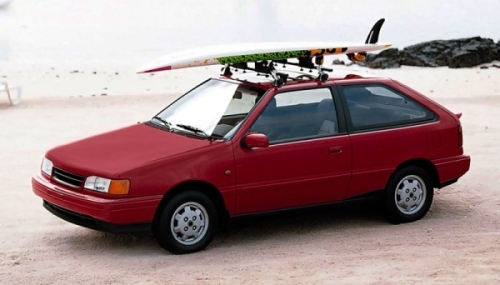 Hyundai’s 1986 Excel
The company has actively expanded its presence there with models such as the Sonata, the Avante (dubbed the Elantra in the U.S.), the Santa Fe and the Tucson, over the past decade.

Kia, before the automaker was acquired by Hyundai in 1998, launched its U.S. campaign with exports of the Sephia sedan in 1994.

Kia is also emerging as a competitive player there with sales of models including the K5 (called the Optima in the U.S.) and the Sorento R.

Further, the affiliated automakers are about to become the fourth non-American automotive group, whose yearly vehicle sales exceed 1 million units in the United States, in 2011.

The other three non-American brands which posted sales of 1 million units per annum in the world’s biggest automobile market are Toyota Motor, Honda Motor and Nissan.

The epoch-making performance of Hyundai-Kia in the U.S. comes 25 years after Hyundai Motor tapped the market in 1986 with exports of the Excel sedan.

The U.S. will also be the second country where Hyundai-Kia has sold 1-million-unit sales, following China in 2010.

The two companies grabbed 9 percent of the North American market for the first 10 months of 2011, compared with 3.3 percent in 2001.

While General Motors and Ford Motor are vying for to be No. 1 in sales, Hyundai and Kia have been in close competition with three other players ― Chrysler, Toyota Motor and Honda Motor ― to capture third place.

On a monthly basis, Hyundai-Kia saw their U.S. market share exceed 10 percent for the first time last May. Their market share reached 14.6 percent in July.

They had been regarded as minor players in America and had focused on finding a niche, their main target being the small vehicle market.

Now the companies have been shifting consumer targets on the back of their upgraded brand image.

In 2001, Hyundai-Kia saw small vehicles account for more than half in their North American sales. For sales in the U.S., that figure has declined by 24.5 percentage points over the past 10 years.

After seeing continuous growth in sales of mid- and large-sized sedans and sport utility vehicles, the portion of the automakers’ sales for small cars has dropped to 30 percent.

While the spokesman acknowledged American consumers’ general preference for large vehicles, he said it was noteworthy that “the higher income brackets have begun to acknowledge the technology of Korean automakers.”

During the first quarter of 2011, Hyundai Motor Group’s share of the U.S. market for mid-sized sedans rose to a record high.

The automotive group grabbed 15.1 percent of the mid-sized sedan market in the U.S. by selling 66,554 units of Hyundai’s Sonata and Kia’ K5 (or Optima) for the first three months.

The automaker has also been successful in the premium-luxury sedan market as the Equus’ market share surpassed 5 percent between January and April.

The accumulated share of the Equus reached 5.4 percent during the four months with sales of 950 units.

Considering that Hyundai Motor only began selling the Equus in December, there is a possibility that its share could be equivalent to that of the Genesis in one or two years. 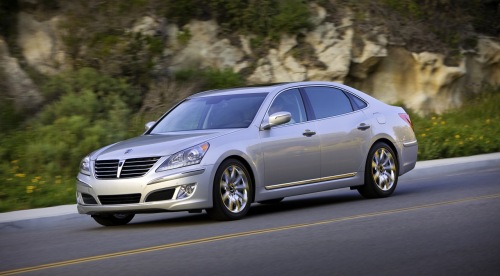 Hyundai’s Equus 2011 model
“Sales of the Genesis and Equus go beyond our expectations,” the spokesman said. “We forecast sales of the sedans to reach more than 30,000 and 3,000 units, respectively, this year in the U.S.”

Apart from their rapid sales growth over the past few years, the future plan of Hyundai-Kia has been focused on “sustainable growth” under instruction of Hyundai Motor Group chairman Chung Mong-koo.

Earlier this year, Chung called for employees in the U.S. to prioritize producing vehicles with advanced quality.

“Beyond the products which simply satisfy consumers, it is time for us to touch customers’ heart by providing them with best level-quality products,” he has told the staff in Los Angeles.