Honda's human-shaped robot can now run faster, balance itself on uneven surfaces, hop on one foot and pour a drink. Some of its technology may even be used to help out with clean-up operations at the stricken Fukushima nuclear plant. 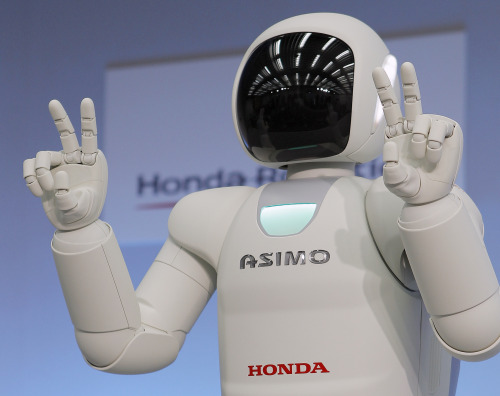 Honda Motor Co.'s revamped human-shaped robot "Asimo" uses a Japanese sign language during a news conference at the Japanese automaker's research facility in Wako, near Tokyo, Tuesday, Nov. 8, 2011. Asimo can now run faster, balance itself on uneven surfaces, hop on one foot, pour a drink and even almost "think" on its own. (AP-Yonhap News)

Honda's demonstration of the revamped ``Asimo'' on Tuesday at its Tokyo suburban research facility was not only to prove that the bubble-headed childlike machine was more limber and a bit smarter.

It was a way to try to answer some critics that Asimo, first shown in 2000, had been of little practical use so far, proving to be nothing more than a glorified toy and cute showcase for the Honda Motor Co. brand.

Honda President Takanobu Ito told reporters some of Asimo's technology was used to develop a robotic arm in just six months with the intention of helping with the nuclear crisis in northeastern Japan.

The mechanical arm can open and close valves at Fukushima Dai-ichi nuclear power plant, which went into meltdown after the March tsunami, according to Honda. The automaker is working with the utility behind the problem plant, Tokyo Electric Power Co., to try to meet demands to bring the plant under control.

Ito acknowledged that the first idea was to send in Asimo to help out, but that was not possible because the robot cannot maneuver in rubble, and its delicate computer parts would malfunction in radiation.

But in Tuesday's demonstration, Asimo was able to walk without falling over 2 centimeter (0.8 inch) padded bumps on the floor.

Asimo was also able to distinguish the voices of three people spoken at once, using face recognition and analyzing sound, to figure out that one woman wanted hot coffee, another orange juice, and still another milk tea.

The new Asimo got improved hands as well, allowing individual movement of each finger, so it could do sign language.

``My name is Asimo,'' it said, making the signs of its words with stubby fingers.

It also opened a thermos bottle and gracefully poured juice into a paper cup.

Ito said Asimo had developed autonomous artificial intelligence so that it could potentially maneuver itself through crowds of people, without remote control or stopping each time to check on its programming.

But he acknowledged that making robotics into a practical business will take more time, meaning Asimo wasn't about to show up in any home soon.

``Maybe at the start this was a dream of engineers to make a machine that was close to a human being, like Astro Boy,'' he said. ``We think Asimo is good.''

Other manufacturers are also developing robots, eager to cash in on the expected needs of Japan's rapidly aging population.

Toyota Motor Corp., Japan's top automaker which makes the Prius hybrid and Lexus luxury models, is among those to have jumped on the robotics bandwagon.

In the past, it has shown robots that can play the violin and talk like receptionists. Last week, it showed a computerized device that latches on to the body to help old or sick people walk and keep balance.

Honda, which makes the Odyssey minivan and Accord sedan, has developed similar brace-like gadgets to help people get about.

Neither the Toyota nor Honda product is on sale yet.

Still, experts say such research is important to keep up.

``Maybe it can't be put to use right away, but it is definitely a technology that we should keep working on to advance,'' Hiroshi Kobayashi, a mechanical engineering professor at Tokyo University of Science, said of the new Asimo.

``It is common for what we achieve in research to turn out later to lead to many products,'' said Kobayashi, who has developed experimental robots. (AP)