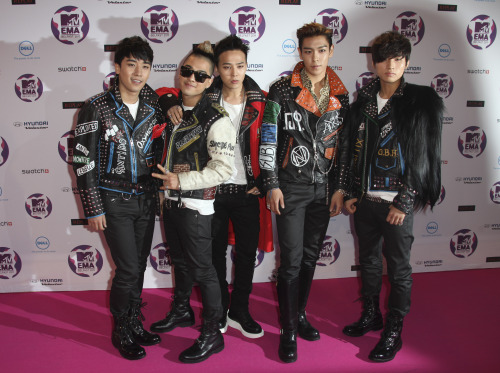 It was the first time a Korean act has won at the MTV Europe Music Awards (EMA), Big Bang’s agency YG Entertainment said.

The Best Worldwide Act, a new award this year, is chosen through online fan voting on the MTV EMA’s official Website, with voters given the option of five acts representing five regions of the world.

The five candidates were Restart from Latin America, Big Bang from Asia-Pacific, Lena from Europe, Britney Spears from North America and Abdelfattah Grini from Africa, India and the Middle East.

In the acceptance speech, Big Bang member Taeyang said: “This is only because of our fans, through all the ups and downs. Thank you for standing by us.” Big Bang has gone through a tough year. In May, 22-year-old Daesung was involved in a deadly car accident over which he faced an investigation by the prosecution.

Then, in October, group leader G-Dragon admitted to smoking marijuana after testing positive for the substance, and was booked by police. However, they did not press charges, citing the small amount of the drug in his system and G-Dragon’s indictment was suspended.