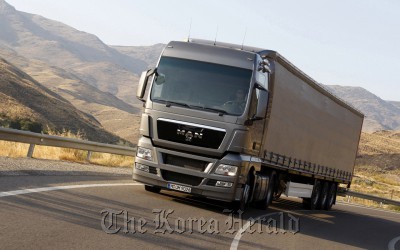 MAN
FRANKFURT (AFP) ― Volkswagen, Europe’s biggest carmaker, said on Thursday it had received approval from Chinese authorities to increase its stake in MAN, the final hurdle in the takeover process.

“The Chinese competition authorities have approved the increase of the stake of Volkswagen in MAN,” VW said in a statement.

Approval by the Chinese competition authorities marked the completion of all regulatory clearances necessary for settlement and with it, VW had been able to take another “decisive step on its way towards an integrated commercial vehicles group consisting of MAN, Scania and Volkswagen,” it boasted.

The takeover was now set to be finalized on November 9, after which VW would hold a stake of 53.71 percent in MAN’s share capital and 55.9 percent of its voting rights, the German company said.

A merger of VW and MAN has already been approved by regulatory authorities in Germany, Japan, the United States and seven other countries.

VW also owns 70.94 percent of the voting rights in Scania, while MAN owns another 17.4 percent.