[ The Korea Herald – Send E-mail ]
Conductor finds hope in young Korean musicians
By Korea Herald
Published : Nov 6, 2011 - 18:35
Updated : Nov 6, 2011 - 18:35
When she was a teenager, Sung Shi-yeon used to listen to Metallica over and over again. The strong beat and symphonic development of heavy metal music may find a similarity in the deep and powerful orchestral sounds of Mahler’s symphonies, one of which Sung is to conduct soon.

The Seoul Philharmonic Orchestra’s associate conductor will showcase Mahler Symphony No. 7 at Seoul Arts Center’s Concert Hall on Nov. 11, as part of the SPO’s Mahler Series. After Sung’s No. 7, SPO music director Chung Myung-whun will conduct Mahler No. 9 on Dec. 9 and the No. 8 as the finale of the series on Dec. 22.

“Mahler was a person who was able to find sadness in happy music and happiness in sad music. Our generation, so shallow, needs this kind of music,” Sung told reporters on Thursday.

“Because everything is changing very fast, the current generation seems to desire more. Mahler’s music can fill such desire.”

“Mahler fever” has been sweeping the country this year with tickets to the six concerts of the Mahler Series ― Symphony 4, 5, 6, 7, 9 and 8 in that order ― almost all sold out early this year.

Mahler normally elicits a variety of evaluations from music critics ― over-pretentious, vulgar, difficult, supremely creative or a genius in her use of orchestral instruments. 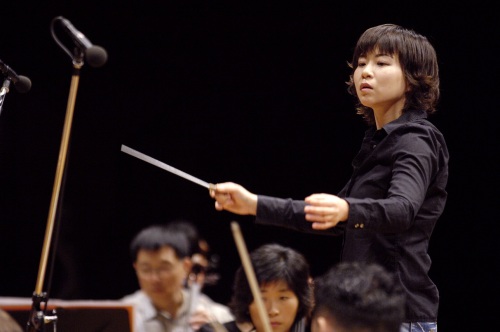 Sung Shi-yeon, associate conductor of the Seoul Philharmonic Orchestra. (SPO)
“The Symphony No. 7 has more focus on the brass part. It is a challenging piece for me,” said Sung, who won top prize at the Bamberg Gustav Mahler Conducting Competition in April 2007.

She said her interpretation of Mahler is rather extreme with energy going in every direction, while maestro Chung’s unfathomably powerful energy seemed to have been contained when she saw Chung conducting Mahler Symphony No. 3.

“I think maestro Chung’s energy comes from his long-time experience,” she said.

After winning the 2006 Sir Georg Solti International Conductors Competition, Sung’s reputation rose quickly in the international music scene. In the summer of 2010, she finished her three-year tenure as Assistant Conductor to James Levine at the Boston Symphony Orchestra.

Sung said her favorite performance this year was the Mozart’s Requiem with the Great Mountains Music Festival Orchestra in the summer at the Alpensia resort in Gangwon Province.

“Young musicians of the Great Mountains Music Festival Orchestra were able to complete Mozart Requiem in three days ― such a short period of time ― with me. I saw hope there,” Sung said.

She added that she was able to witness Asia getting greater attention than ever from the West, mainly due to the economic downturn in Europe and the U.S. which is reducing investment in music.

The Berlin-based musician said she saw many European orchestras facing difficult times due to cuts in subsidies or sponsorship, whereas an increasing number of Asian artists study and perform in Europe and in the U.S.

After the upcoming Mahler concert, Sung will tour overseas until March.