Growth has slowed for high-end carmakers from the record pace in the first half as Europe’s debt crisis unsettles consumers. Daimler AG, maker of Mercedes-Benz, reported its first earnings drop since the third quarter of 2009, burdened by expenses for new models. BMW lost its profitability lead in the luxury-car segment last quarter to Audi and predicted weaker margins in the final three months.

“Challenges to keep flexibility, to keep the efficiency up there are pretty huge for the industry,” Arndt Ellinghorst, a London-based analyst with Credit Suisse, said in a Bloomberg Television interview. Still, manufacturers like BMW with a strong brand and a global presence are better positioned than “euro-centric mass producers.”

Operating profit at BMW’s automotive unit declined to 11.9 percent of sales from a record 14.4 percent in the second quarter as sales of the 1-Series compact and 3-Series sedan fell ahead of the introduction of next-generation versions, and the company spends 500 million euros in the second half to introduce the overhauled models. The declines and costs were partially offset by higher deliveries of the X3 and 5-Series sedan. 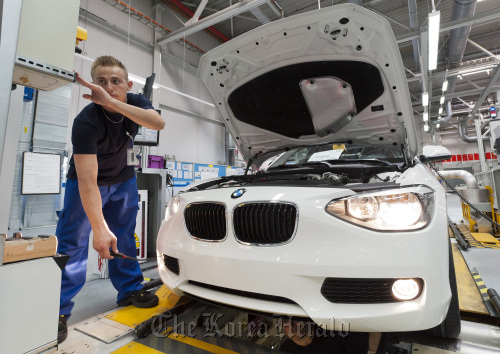 An employee makes final checks to a BMW 1-Series automobile during the last stages of manufacture at the BMW factory in Regensburg, Germany. (Bloomberg)
“It seems that the phase-out of the 1-Series and 3-Series is going better than planned,” said Georg Stuerzer, a Munich- based analyst with Unicredit, who recommends buying the shares. “With that kind of a margin during the changeover of the best- selling models, you can’t complain.”

BMW’s Ebit margin will likely decline again in the fourth quarter because of about 333 million euros in spending on the 1- and 3-Series rollouts and higher material and foreign exchange expenses, Chief Financial Officer Friedrich Eichiner said today on a conference call.

BMW introduced an overhauled 1-Series in September and will follow with the revamped 3-Series in February. Deliveries of the 1-Series fell 28 percent to 34,600 vehicles in the quarter, while 3-Series sales slipped 1.5 percent to 95,200 cars as customers waited for the new versions. Sales of the X3 tripled to 30,200, while 5-Series deliveries rose 31 percent to 79,900.

BMW stuck to its forecast that 2011 sales and profit will be “significantly higher” than last year. Third-quarter net income rose 24 percent to 1.08 billion euros.

“Our strategy is paying off,” Chief Executive Officer Norbert Reithofer said. “It’s our guard rail in a volatile environment,” which is likely to last at least until 2015.

The group’s third-quarter operating margin was 10.4 percent after a loss in the motorcycle division. Volkswagen AG’s Audi, which aims to take the luxury-car lead by 2015, surpassed BMW with an Ebit margin of 13.1 percent.

BMW’s growth in car sales over the last quarter slowed to 9 percent from 18.5 percent in the second as the 1- and 3-Series get renewed and the aging X5 sport-utility vehicle faces the revamped Mercedes-Benz M-Class.

The maker of BMW, Mini and Rolls-Royce cars is targeting an Ebit margin at its auto unit exceeding 10 percent for the year, with sales projected to reach a record of more than 1.6 million vehicles. The company plans to generate an Ebit margin of 8 percent to 10 percent for 2012 and beyond.

Mercedes’ third-quarter Ebit fell 15 percent to 1.11 billion euros as it introduces the B-Class, the first in a line of five new small cars. Audi posted a 56 percent increase in Ebit to 1.4 billion euros, boosted by demand for the A6 sedan and Q5 SUV.

Even with profit margins narrowing, BMW has widened its sales lead over Audi and Mercedes, which have both vowed to topple BMW as the luxury-car leader. The company delivered 1.02 million BMW-brand vehicles after the first nine months of 2011, compared with Audi’s 973,200 and Mercedes’ 919,288. BMW is targeting sales of more than 2 million cars by 2020 and is considering new models and factories to fuel the expansion.

The overhauled 3-Series should help BMW maintain its sales lead. The best-seller is projected to help boost the brand’s deliveries by 9.3 percent to 1.47 million next year, according to IHS Automotive. As a result, Audi’s gap to BMW will likely widen to 139,700 autos from 97,400 in 2011. Mercedes may get closer, buoyed by a new line of compacts. IHS forecasts Mercedes trailing BMW by 108,700 vehicles in 2012, closer than the 110,500 this year.