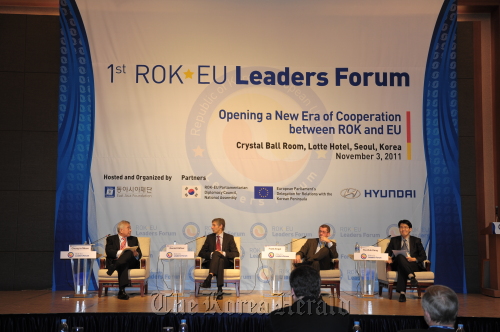 European Parliament’s Delegation for Relations with the Korean Peninsula member Frank Engel (second from right) and other panelists discuss the integration of East Asia using the example of European integration. (East Asia Foundation)
Over 100 lawmakers, and diplomatic and academic dignitaries from Korea and the European Union gathered to discuss how best to raise the effectiveness of their free trade agreement, in Seoul on Thursday.

At the first ROK-EU Leaders Forum, topics centered on the FTA were discussed to fully utilize the deal, which has already been in effect for four months.

Representing the two sides were Democratic Party lawmaker Lee Kang-rae, president of the ROK-EU Parliamentarian Diplomacy Council of the National Assembly, and Christion Ehler, chairman of the European Parliament’s Delegation for Relations with the Korean Peninsula.

They discussed ways to promote cooperation between the Korea and the EU, and increase mutual benefits in political, economic, social, cultural, diplomatic, security and other fields.

Vice chairman of the European Parliament’s delegation, Gerald Hafner kicked off a discussion on possible ways to integrate East Asia in similar ways to the EU. However during the discussion, Frank Engel, a member of the delegation, brought up the topic of Greece and its sovereign debt crisis as evidence that the current EU is ineffective.

Panels also touched on the economic and social impact of the FTA and sought other ways of cooperation.

Also attending the forum were five other legislators of the European Union including Anna Rosbach, vice chair for the delegation and Tomasz Kozlowski, ambassador and head of the EU delegation to the Republic of Korea.

EU leaders attended the forum after a four-day visit to North Korea.

Korean Minister for Trade Kim Jong-hoon and Gong Ro-myung, chairman of the East Asia foundation and former foreign minister, were among the Korean dignitaries at the event, hosted by the East Asia Foundation.

The FTA between the partners that took effect July 1 is the EU’s first FTA with an Asian country. Before the FTA, the EU was already Korea’s second-biggest trading partner.

Meanwhile in France, President Lee Myung-bak and European Council President Herman Van Rompuy agreed to deepen the strategic partnership between Korea and the EU, ahead of the G20 Summit on Friday.

The forum was sponsored by Hyundai Motor Co.