[ The Korea Herald – Send E-mail ]
Italian chef to show how simple pizza can be
By Korea Herald
Published : Nov 3, 2011 - 18:57
Updated : Nov 4, 2011 - 14:54
Italian-born Massimo Mele, executive chef of the Hugos Group in Sydney, said he will show how easy and simple making pizza should be in his upcoming cooking class at the Banyan Tree Club & Spa Seoul.

Mele is in Seoul for a week as a guest chef for the Italian promotion “Festa Italiana” which runs through Tuesday at the hotel’s European restaurant The Festa Bistro and Bar.

“I’m gonna show people how simple pizza should be. Pizza classes are really good because you can do it with your kids,” Mele told The Korea Herald on Wednesday.

“People are scared of cooking but it’s all about having fun in the kitchen, not taking it too seriously.” 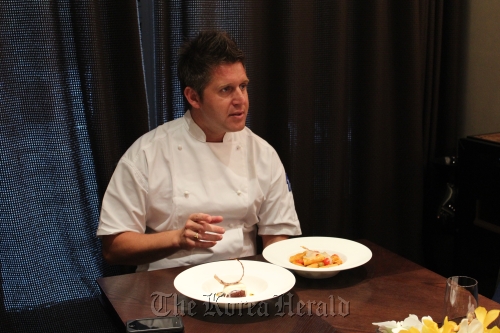 Massimo Mele, executive chef of the Hugos Group, in Seoul on Wednesday (Banyan Tree Club & Spa Seoul)
The cooking class will be held on Monday at 3 p.m., consisting of making Italian pizzas and classic tiramisu where Mele will give a little bit of twist by using some alcohol in the dessert.

Mele was born in Naples in southern Italy and his family, who were restaurateurs, moved to Tasmania, Australia, when he was eight.

The Hugos Manly, where Mele works as executive chef, near Manly Beach in Sydney, won the Dairy Farmers First Prize for Best Pizza in New South Wales and the Best Pizza in Australia from the Restaurant Catering Association in 2009.

He traveled to New York and Los Angeles for the G’day USA event in 2009 and 2010 and served some 800 key figures from around the world.

At Banyan Tree, Mele will also serve an Italian gourmet wine dinner on Saturday and a Slow Sundays Italian brunch on Sunday.

The 31-year-old chef said his cooking philosophy is “going back to the roots and origins.”

“You don’t have to mask so many flavors. It should be as simple as a tomato sauce,” he said.

The Italian gourmet wine dinner on Saturday is priced at 150,000 won, Slow Sundays Italian brunch, 65,000 won and Italian cooking class on Monday, 80,000 won. A gourmet lunch and dinner course menu for 45,000 won, is available through Tuesday. For more information, call (02) 2250-8170 or e-mail FESTABistro-Bkrse@banyantree.com.