Ahead of the 100th birthday of its founder Kim Il-sung, the North Korean regime is coming up with a variety of ideas to rake in foreign currency from outside the country as well as from its own starving people, sources say.

North Korea has been struggling to secure as much outside assistance as possible before 2012, which is the centennial of its founder’s birth.

Pyongyang’s leader Kim Jong-il has boasted that a “powerful, prosperous” nation will be built by that year, a goal he is determined to achieve ahead of a transfer of power to his youngest son Jong-un.

“It is ironic, really,” a source close to North Korea said on the condition of anonymity. “The regime is creating another source of burden in order to idolize the founder and leader with an expensive political extravaganza.

“Some people are calling the regime ‘the bad robber’ these days,” the source added.

A growing number of overseas North Korean diplomats have been purchasing foreign cigarettes and alcoholic beverages from duty free shops, mostly to sell them back in regular markets. The profit is sent home to be collected for the events next year, another source in Beijing said.

The regime also uses separated families in the U.S., Japan and elsewhere, according to the source.

By approaching wealthier overseas Koreans who have family living in North Korea, officials offer to deliver money to their impoverished families and pocket the dollars, he said.

Some families are also paying several thousands of dollars, fooled by false promises of a chance to reunite with their long lost family members.

Tens of thousands of families were left asunder during the 1950-53 Korean War, which divided the peninsula into two Koreas that are technically still at war with one another as of now.

North Korea is also making hard currency in China by selling fake artwork. Many wealthy Chinese people are making investments without knowing most of the works are fake, the source said.

North Korea has also been expanding its drug output to make money in China.
While cautious not to make the case official for the sake of ties with its longstanding ally, China appears to be becoming impatient with the increasing amount of illegal drugs flowing in from North Korea, a U.S. weekly magazine recently reported.

Over the past decade, methamphetamine ― also known as crystal meth or ice because of its flaky crystals ― has flooded China’s Yanji and the wider Jilin provinces, fueled by border transients, Newsweek magazine reported.

North Korean meth is reportedly much cheaper than meth made in mainland China.

A desolate city some 80 kilometers from the river border between China and North Korea, Yanji is heavily influenced by the Korean language and culture. In just over two decades, the number of drug addicts in Yanji increased roughly 50 times, according to a Brookings Institution report, with more than 90 percent addicted to meth or similar synthetic drugs. 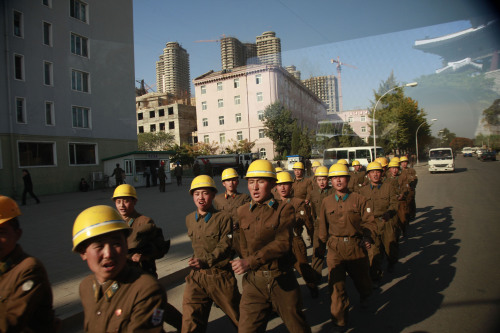 In this photo taken through the window of a vehicle on Oct. 26, North Korean construction workers march on the road in Pyongyang in North Korea. (AP-Yonhap News)
First synthesized in 1893, meth is now one of the world’s most widely abused drugs.

North Korea is also running about 200 trading companies and entities to earn foreign currency, according to recent reports.

The list was compiled after an analysis of the past five years of issues of U.S. magazine Foreign Trade, which publicizes North Korean companies and entities in connection with the country’s foreign trade and its bid to attract foreign investment.

Still, the actual number may be smaller as North Korea could have used different names for the same companies. The North frequently changes the names of its trading companies and entities to try to avoid sanctions imposed for its two nuclear tests in 2006 and 2009, according to the South Korean government.

The list includes Korea Taesong Trading, which was blacklisted last year by the U.S. for its involvement in the trade of weapons of mass destruction and other activities banned by U.N. resolutions.

South Korean officials said the North Korean trading companies and entities are believed to be engaged in a competition to show their allegiance to the leader and heir apparent.

In return, the North Korean leader showers his top aides and other elites with luxury goods to maintain their loyalty.

North Korea’s central bank is also buying foreign currency and gold from its people, paying them back with North Korean money. North Koreans are forced to exchange currency due to ongoing inflation.

The North Korean regime is also taking undue profits by selling mobile phones at expensive prices. The phones, bought for some $80 from China, are sold for about $300, sources say.

With at least 700,000 mobile phones sold as of this year and with a separate $140 in fees to register service, North Korea has made at least $250 million via its mobile phone “business,” experts say.

The Kim regime is also making money from the North Korean workers in Gaeseong, where a joint factory park is being operated by South Korea.

In August, North Korea asked South Korean firms there to pay incentives to laborers with money, instead of the currently handed out chocolate cakes.

Laborers working overseas are also asked to pay up to 70 to 90 percent of their wages to the regime for“various purposes” such as tax, experts say.