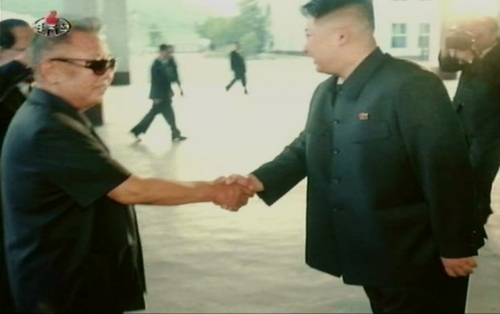 In video footage released Monday by North Korea’s official Korean Central TV Broadcasting Station, its authoritarian leader Kim Jong-il (left) shakes hands with his third son and heir apparent Kim Jong-un like equals after returning from his visit to Russia in August.
North Korea has reportedly been scrambling to shield itself from the fallout of Libyan dictator Moammar Gadhafi’s death last month, a sign that his demise was a shock to the regime.

It has intensified ideological education for young people since Gadhafi was killed in his hometown of Sirte on Oct. 20, about two months after the downfall of his regime that ruled the northern African state for 42 years.

It also appears to be stepping up measures to bar overseas citizens from returning home to prevent information on democratic movements in Libya and other states spreading among its people, diplomatic sources said.

While strictly keeping outside information from flowing into the country, its media have recently issued a set of editorials to promote the “supremacy” of its regime in an apparent bid to minimize any possible impact from Gadhafi’s death.

“Yes, it appears that Gadhafi’s death has put North Korean leader Kim Jong-il under some psychological pressure,” Yang Moo-jin, a professor at the University of North Korean Studies, told The Korea Herald.

“Under that pressure, Kim might be seeking to bring his people together internally while seeking dialogue externally (with the U.S.). As shown in the death of Iraqi dictator Saddam Hussein, Gadhafi’s death might have given him the lesson that he should not be an adversary against the U.S.”

Yang also echoed other experts’ view that it would be difficult for the growing democratic aspirations in the Middle East and northern Africa to influence North Korean society.

“The situation in Libya is totally different from that in North Korea. Libya has trade relations with the international community and its people can listen to outside voices through various communication tools. Plus, it has opposition leaders that had fought against Gadhafi,” Yang said.

“In the North, however, there is zilch. Though there are apparently complaints among ordinary people, there is no mechanism to rally them together (against the current regime). There are also no opposition forces whatsoever to incite them and no tools to obtain any outside news.”

The North has so far remained silent about the death of the Libyan dictator. But in an editorial, it apparently alluded to the fall of the Libyan regime while praising its political, social system in a move to strengthen ideological education.

“In history, there are records of dignified countries declining and collapsing after throwing their weight worldwide, and of parties with millions of members and ‘invincible’ militaries falling apart,” said an Oct. 31 editorial in Rodong Sinmun, the official daily of the North’s ruling Workers’ Party.

“The socialist homeland is the cradle for the people of Kim Il-sung (the North’s founding father),” the editorial went on to say.

In another piece in the Oct. 27 edition of the same daily, the North encouraged young students to uphold their country’s “way of life” in efforts to maintain their ideological dedication to the regime.

“Our project to establish our way of life is moving well into higher stages. Our way is superior to any others,” it said.

This piece appears to indicate that the North is striving to insulate its young people from new ideas, particularly democratic, capitalist principles that could threaten its regime.

To prevent inflow of information on the downfall of the Gadhafi regime, the North has reportedly barred North Korean officials working in Libya from coming home.

“I heard that the North has blocked its officials, including high-level ones, who have long served overseas for three to five years from returning home,” a North Korean expert was quoted as saying in the local media.