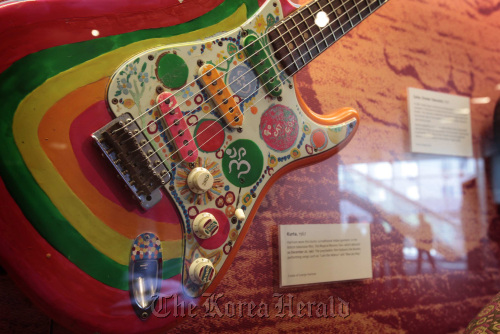 George Harrison’s brightly colored Stratocaster, “Rocky,” is among the former Beatles memorabilia on display at the Grammy Museum in Los Angeles, California, Oct. 18. (Los Angeles Times/MCT)
LOS ANGELES ― Remember George Harrison’s unforgettable opening line in the Beatles’ 1969 hit “Something?” “Something in the way she moves/attracts me like no other woman.”

Of course not, because he sings “lover,” not “woman.” But “woman” is what Harrison wrote before changing one word that could well have spelled the difference between a hit and a miss, an edit that’s on display at the Grammy Museum in “George Harrison: Living in the Material World,” a show focusing on the man pigeonholed early as “the quiet Beatle.”

The handwritten lyrics to “Something,” among a half-dozen samples of Harrison songs lent to the museum by his widow, Olivia Harrison, also include a verse that Harrison rejected before putting perhaps his best-known song into final form.

Along with lyrics for other songs, including “While My Guitar Gently Weeps,” “Here Comes the Sun” and “All Things Must Pass,” the exhibit, which continues through Feb. 12, boasts a handful of his guitars, such as the black Grestch Duo-Jet electric that was his first decent instrument, for which he paid 75 British pounds.

Then there’s the high-collared tan jacket he wore for the 1965 concert at New York’s Shea Stadium, and the elegant cream suit he wore at the Concert for Bangladesh he spearheaded in 1971, the first all-star rock benefit show.

Many items Olivia Harrison loaned for the show have not been out of their home in Friar Park, Henley-on-Thames, England, since Harrison died of cancer 10 years ago. “I don’t know how they got me to let any of this stuff go,” she told the Los Angeles Times recently, chuckling gently. “They must have used some kind of reverse psychology.”

The personal items are ensconced safely within plexiglass display cases, but the exhibition also includes three interactive hands-on features where visitors can further explore his music and the equipment he used to make it.

After the show winds up its four-month L.A. stay ― admission is $10.95 to $12.95, free to museum members and children 5 and under ― museum Executive Director Robert Santelli says he hopes it will become a traveling exhibit.

“There are a lot of fans who want to see these things, and it’s not possible for them to come here,” Santelli said. “So it’s important to take it closer to them.”