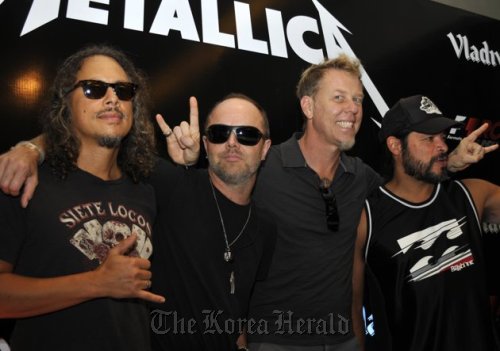 Thousands of fans had already turned up at Friday’s concert, timed to coincide with this weekend’s Formula One Grand Prix, but were enraged when it was axed for safety reasons.

Newspaper pictures showed piles of shattered equipment and the Times of India said one man broke his leg when he was pushed down a stairwell in a stampede.

“Many others were also injured in the melee,” Shouvik Roy, 41, was quoted as saying, adding that some youths were also taken to hospital. “There were no marshals to guide people and few cops to help.”

Metallica said the concert in Gurgaon, near New Delhi, was initially postponed to Saturday because of damage to a security barrier, but organizers were then unable to secure a second permit.

“We are deeply disappointed with this news as we were looking forward to our first experience in India as much as you guys were,” they said in a statement late on Friday.

The Times, which pictured youths in Metallica T-shirts shouting and showing their middle fingers, said fans tore down sound systems, barriers and hoardings, and threw bottles at the stage and LED display screens.

“I’m glad my sons got out from the Metallica madness unscathed. Why can’t we organize an event without drama?” tweeted Kashmir chief minister Omar Abdullah.

The incident comes after Canadian rocker Bryan Adams called off a concert this year when police refused to give clearance. Flamboyant pop star Lady Gaga is due to perform after the Indian Grand Prix on Sunday.