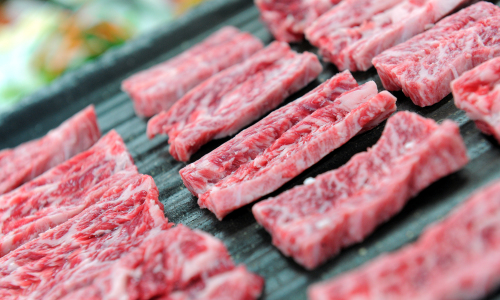 Customers can grill prime meat purchased from Majang Meat Market (like the hanwoochuck tail flap pictured here) at wholesale prices and enjoy it with sides at the Meat Village Butcher Shop for 4,000 won per person.
Self-selected prime cuts for a bargain at Majang-dong’s butcher-restaurant

What if you could pick the cut, the grade and the exact quantity of meat you wanted to eat at a restaurant?

At the Meat Village Butcher Shop in Majang Meat Market, patrons can browse the stalls and select prime beef and pork before bringing their purchases over to the restaurant where a pan grill and sides are provided at 4,000 won per person.

The perks are clear.

Customers can choose from a diverse range of butchers, snout-to-tail cuts (including those hard-to-get, prized parts), regions (meat is brought in from all over the country) and grades, at wholesale prices.

According to Majang Meat Market Merchant Association general affairs chief Park Sung-kyu, customers are spending 20 to 30 percent less by getting their cuts straight from the butcher’s block rather than regular marts, which makes sense because, in essence, they are eliminating the middle man.

If Kim’s estimate is correct, then customers are getting a bargain by opting to do the footwork and source their own meat. 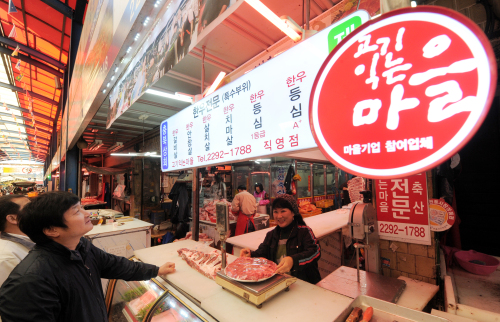 Grilling is do-it-yourself. Fans of charcoal might be disappointed to learn that only stove-top grill pans are provided, and the surrounding environs (butcher stalls and its wares) might be off-putting for squeamish diners.

On the upside, the restaurant is clean and spacious and the banchan ― the greens, chili peppers, kimchi, pickled onions and seasoned vegetables ― are fresh and tasty.

Run by the Majang Meat Market Merchant Association, the Meat Village Butcher Shop opened less than three months ago. According to a Seongdong District Office representative, the restaurant was selected by the Ministry of Public Administration and Security for financial support as part of a project devoted to fostering jobs. A Ministry of Public Administration and Security representative added that this is a government-approved effort.

“The association is doing this to help stimulate the Majang Meat Market,” Kim explained. “Customers can eat meat from the market on the premises and if they like it, they can buy some and take it home.”

What sets Meat Village Butcher Shop apart from other like-minded butcher-restaurants where patrons can pick cuts and just pay a little extra for a grill and sides?

Kim stressed that diners can shop the entire Majang Meat Market for their cuts, whereas at your typical butcher-restaurant, meat tends to be provided by that one in-house supplier.

The market in question is not just any market. It is South Korea’s biggest meat market, and, according to Park, it houses around 2,500 businesses.

In 1963, the market relocated from Sungin-dong, Jongno-gu to Seongdong-gu’s Majang-dong, and in 1998, the market’s slaughterhouses were shut down. Now meat is brought in by trucks from slaughterhouses all over the nation early every morning, said Park and Kim.

“We distribute 70 percent of the city’s meat,” said Majang Meat Market Merchant Association director Ko Ki-bok, who added that wholesale buyers, like butcher shops and buffets, are their main clientele.

Well into the morning, long after trucks have dropped off slaughtered cattle and pigs, butchers are still busy carving, slicing and cleaning their wares. Whole pig heads are lined up in rows under those famed red lights over the stalls. Offal is piled up in tubs, and meat hangs from racks. In display cases, neatly packaged cuts of beef, brilliant red and accented with snow white marbling, await customers.

For newcomers, it can all be quite overwhelming. While seasoned market veterans can navigate the thousands of shops with ease, novices may feel they have their work cut out for them when it comes to picking their own meat.

To help out, the association has given their stamp of approval to 13 businesses which all bear the Meat Village Butcher Shop’s logo.

“Those shops all bear our trademark red signs,” said Kim, who added that customers can also bring in meat from any merchant to their restaurant.

If meat is purchased from an association-accredited business, than customers can have it delivered directly to the restaurant instead of having to carry it themselves.

“If you want more meat while dining here, you can also call one of the accredited businesses whose numbers are listed on the wall and have more meat delivered,” Kim said.

Having a list-up of certified shops may be helpful to beginners, but unless you’re an expert, the act of picking a cut and grade of beef or pork and then grilling it yourself could still be challenging.

“Look at the marbling,” advised Jaein Livestock co-owner Cho Sung-joon. “If you are getting beef for a tartare then it should not have any fat or grease in it. Good beef should be red and have tons of marbling.”

“Good beef should be bright and clear in color, not murky or dark,” Kim said.

For the cuts themselves, Kim recommended trying some delicacies.

“Most customers eat sirloin, but there are special cuts like chuck tail flap, thin flank and the beef attached to the spleen,” he said. “Those parts are tasty.”

For pork, Kim stresses that it needs to be cooked all the way through.

Customers seem to have no qualms about the hands-on-approach of the Meat Village Butcher Shop. According to Kim, the 112-seat restaurant gets so busy on Thursday, Friday and weekend nights that it’s hard to get a seat without reservations.

“When we opened, Majang-dong merchants were our initial customers,” said Kim. “Now we get a lot of diners who aren’t from around here.”

Opening hours are from 10 a.m. to 10 p.m. daily. Meat Village Butcher Shop is closed on the first and third Sunday of every month.

To get there go to Wangsimni Subway Station Line 2, 5, Exit 3. Hop on any bus in front of the Seongdong District Office at get off at the second stop. Enter Majang Meat Market from the west entrance. Walk past the first intersection. There will be a huge sign hanging from the ceiling pointing to a staircase on the right that reads “Meat Village Butcher Shop” in Korean. Walk up the stairs to the third floor.