Munich-based BMW Group regards Korea as one of the important markets for their global management despite its small portion in Korea of the automaker’s total sales worldwide.

Apart from the boom in the import vehicle market in Korea, the automobile giant’s focus on Korea appears based on its strong confidence in its Korea branch CEO Kim Hyo-joon.

Last year, personnel managers at the company’s German headquarters asked the 54-year-old Korean CEO to work for the group for several more years after the retirement age of 60.

“I have yet to answer the proposal,” he told The Korea Herald. “Should my retirement age be extended, my successor should wait for several years more.”

Kim said he always be ready to hand over his seat to a figure with noteworthy performances among his staff.

“I believe a leader should leave his post without hesitation for the company if his level of contribution to the company lags behind other potential leaders.”

In fact, he has fostered many competitive employees over the past 16 years since the establishment of BMW’s Korea unit in 1995.

Market observers speculate that Kim, who is also serving for the group as one of the senior executives, will be dispatched to other regional headquarters as a key figure.

He puts priority on communications with his staff. The door of his office room is always open during working hours for a friendly business environment. 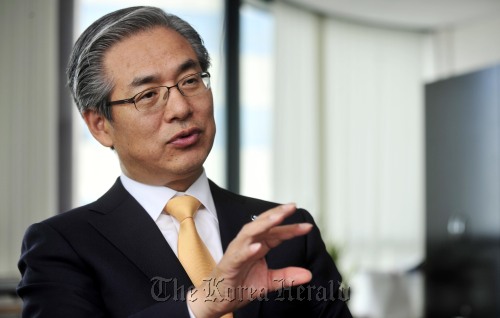 He always stresses “pride” to his employees and dealers. “If we regard our brand is not the world’s No. 1, we cannot convince consumers (to buy our cars).”

“By instructing them to test-drive cars of competitors such as Mercedes-Benz and Audi, I implant them self-confidence that BMW surpasses others in driving performance and product quality.”

He cited the yearly sales ranking in the local market under which BMW Korea has topped the list for more than a decade, excluding only two years when the company yielded its No. 1 position to Lexus Korea.

He said the nation’s largest-scale showroom in the import car industry reflects close coordination with dealers to secure the No. 1 position in Korea.

While BMW’s global sales reach 1.6 million units per annum, the Korean unit’s sales stay at about 20,000 units, accounting for only 1.25 percent.

But the German headquarters is focused on the situation that social leaders account for a great portion of BMW car customers in Korea.

The Korean unit holds a symbolic meaning. The headquarters is a strong supporter of BMW Korea’s social contribution activities.

The company plans to operate a 2 billion won fund for the foundation’s activities in its first year, and increase the operating funds to about 5 billion won over the next three to four years.

Additional funds will be raised by BMW Group Korea and the dealers, and by BMW and Mini buyers.

When a customer chooses to donate 30,000 won ($26) when purchasing BMW or Mini vehicles, three parties ― BMW Korea, BMW Group Financial Services Korea and the dealer ― will each donate the same amount to the foundation.

The funds will be used to support education and research and development concerning environmental issues.

In particular, the funds will also be used to support social and economic exchanges between Korea and European countries.

Recently, BMW has been enjoying further sales growth since the implementation of the Korea-EU Free Trade Agreement on July 1.

“We have a list of about 100 Korean companies. BMW’s collaboration with Korean parts makers will expand,” the CEO said.