Can one’s past be bought?

Fitzgerald’s Jay Gatsby famously tried but failed. It is one of the things that money can’t seem to buy. As Oscar Wilde noted, “No man is rich enough to buy back his past.”

Yet director Lee Soo-in’s new adaptation of Swiss playwright Friedrich Durrenmatt’s 1956 tragicomic play, “The Visit,” takes a different approach to the question, with a rather morbidly romantic take on the already gruesome original.

The extremely layered play, which deals with many themes at once ― vengeance, prostitution, market forces and collective madness ― originally focused on the theme of justice and vengeance, and how both can be bought off. Taking place in the town of Guellen, which literally means “to manure,” the play starts as an old billionaire named Claire arrives for a visit. She had left the town some 40 years ago, and made her wealth by marrying an elderly Armenian millionaire whom she met while working as a prostitute. She is a plane crash survivor, and says she is “unkillable,” showing her prosthetic leg and ivory fingers.

The town suffers financial destitution, and hopes Claire will help revive its economy. To everyone’s surprise, the old woman says she will offer $100 billion under one condition: She wants her first love named Alfred dead, and wants his body. 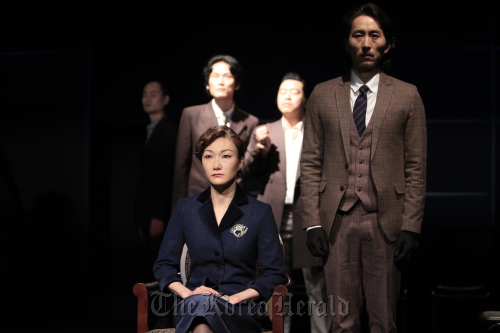 Actress Lee Chun-hee stars in the Korean adaptation of “The Visit,” a 1956 tragicomic play by Swiss playwright Friedrich Drrenmatt at Doosan Art Center in Seoul. (Doosan Art Center)
Alfred, who got Claire pregnant, bribed two men to falsely testify in court that they were in fact the possible fathers of Claire’s unborn baby. He had wanted to marry a girl named Matilda instead, as her family had more money. Claire gave birth to a child out of wedlock and the child was taken away. She eventually left the town, as nobody stood by her side.

In many ways, Claire recalls Grace, the protagonist in Danish director Lars von Trier’s 2003 film, “Dogville.” Played by Nicole Kidman, the film’s character also rises to divine status after suffering abuse and injustice while forced to work as an unpaid prostitute.

What makes Lee’s Claire different from the original, and from Grace, is her desperate attempt to “buy back” her past. In the original play, Claire tells Alfred that she still loves him, but her love has become something monstrous and she wants him dead. Lee removed these lines, and filled the holes with newly written ones, which repeatedly say: “I will bring back our past, I will bring those times back.” Lee’s Claire wants Alfred dead because that’s the only way for her to have him back, and have her past back.

Seo had written the poem inspired by a scene from “Chunhyangjeon,” one of the best known folk love tales in Korea, in which the female protagonist prepares for death as she thinks her low social caste won’t let her be with her love, unless she dies.

“I don’t know exactly what my afterlife is about,” she recites. “... Even if I become dark water flowing under earth, or a piece of cloud in the sky, I will still be in the same world as you are, my loved one.”

Actress Lee Chun-hee’s slim figure, almost gothic pale skin and natural poise certainly complement Lee’s version of Claire, who carries both “han” and the romantic desire to somehow “bring back” her past. She manages to deliver the “unkillable” divine image, while talking about her life as a former prostitute with a brutal sense of reality.

By including the past as one of the things Claire wants to buy off, Lee successfully humanizes the grotesque female character, and makes her seemingly irrational desire for revenge much more convincing and comprehensible.

Instead of the original ending, where the villagers praise God for their newly received wealth from Claire, Lee ends the piece with the old woman leaving the town with the cadaver of her long-time love. The woman’s last line resonates, as she recites how she wants to be remembered by the people who had completely destroyed her life some 40 years ago.

“Claire Wascher,” she recites her name. “The first love of Alfred III.”