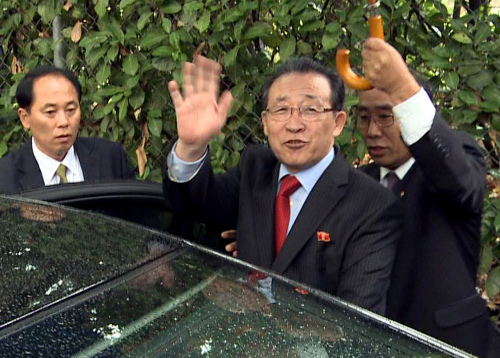 Although the two sides failed to forge an actual deal regarding the resumption of international denuclearization dialogue, talks between the United States and North Korea this week may have provided necessary steps to finally get there, observers in Seoul said Wednesday.

Representatives from Washington and Pyongyang held two-day talks in Geneva on Monday and Tuesday, as members of the six-nation dialogue aimed at disarming North Korea have been escalating discussions over when and how to resume the talks. The Washington-Pyongyang talks came in less than three months after their previous bilateral meeting.

The negotiations, involving the two Koreas, China, the U.S., Japan and Russia, have been stalled since December, 2008, increasing regional tensions.

“We have many differences not all of which can be overcome quickly. But I am confident that with continued effort on both sides we can reach a reasonable basis of departure for formal negotiations for a return to the six-party process,” he said.

“There were series of big improvements, and there were also some parts we had differences in opinion (during the talks),” he said. “We decided to review those and solve them when we meet again.”

Bosworth talked about a narrowing of differences during the two-day meeting which “touched all issues,” but provided no specifics.

Washington is expected to brief Seoul on the results some time this month, according to officials here.

A senior official in Seoul said the Geneva meeting was an indication that main partners of the six-nation dialogue will continue moving toward the reopening of talks with more speed.

“Skepticism is based on the assumption that North Korea will not agree on the key conditions (to resume dialogue),” the official said, asking not to be named due to the sensitivity of the issue.

“But from where I see, every development is pointing at the resumption of talks.”

Another South Korean official repeated that Pyongyang must agree to let outsiders inspect its new uranium enrichment facility as one of the preconditions of the dialogue.

“There cannot be a progress in a true sense until North Korea accepts key conditions,” he said.

Seoul and Washington want North Korea to adhere to a 2005 agreement requiring verifiable denuclearization in exchange for better relations with its Asian neighbors.

Among the preconditions, the two allies are demanding Pyongyang freeze and fully reveal its uranium enrichment program ahead of the talks and let outsiders restart inspecting its main nuclear complex.

In November last year, Pyongyang revealed to outside experts a sophisticated uranium enrichment facility, sparking concerns that the communist state has secured a second way of building nuclear bombs in addition to its existing plutonium program.

“Various efforts to continue negotiations over the resumption of the six-party talks will continue throughout the year,” said Yoon Duk-min, a researcher at the Institute of Foreign Affairs and National Security in Seoul.

Just ahead of the Geneva talks, Pyongyang’s leader Kim Jong-il said his regime will return to the six-party dialogue table “without any preconditions,” reiterating its refusal to discuss the uranium issue.