The performances are to support a center for children from low income families.

Kang Dong-suk’s Hope Concert will be staged from Sunday to Wednesday.

This is the twelfth year the concerts have been held in conjunction with the international relief organization Korea Food for the Hungry International and GSK with the goal of brightening the future of children in need of care and protection. 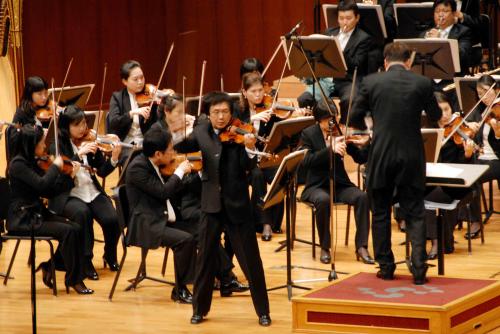 Violinist Kang Dong-suk performs at a previous concert. (Edelman Korea)
The first performance will be held at the Busan Cultural Center on Sunday, followed by the Seoul Arts Center Concert Hall the next night, the Gyemyung Art Center in Daegu on Tuesday and the Samsung Cultural Center of Jeonbuk University in Jeonju on Wednesday.

GSK is currently supporting five Happy Home Schools and two other schools funded by the Happy Smile Fund, created by GSK employees and management who have volunteered for the program since 2009.

Jin Ho Kim, the head of GSK Korea said, “I believe that sharing has the power to spread a positive spirit and is an important foundation for building hope in the future. We hope that Kang Dong-suk’s Hope Concert will contribute to the bright and healthy growth of our children, while further spreading the culture of giving.”

The concert series is sponsored by the Ministry of Culture, Sports and Tourism and Ministry of Health and Welfare.