Polls opened Wednesday for the Seoul mayoral vote and other local by-elections seen as a significant test for the rival parties and presidential hopefuls before South Korea elects a new parliament and a new president next year.

At stake are the Seoul mayoralty and 11 other posts in smaller local municipalities and legislatures. The elections involve no seats in the National Assembly, where the ruling Grand National Party (GNP) has a majority. 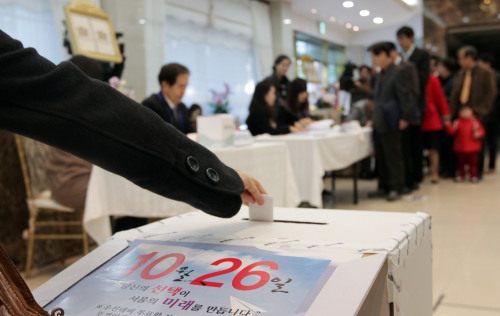 A woman casts a vote at a poll in Seoul. (Yonhap News)

The elections are considered significant for both the ruling and the main opposition parties because the vote comes just six months ahead of April's general elections and the outcome could also affect presidential aspirants, including Park Geun-hye, the GNP's leading contender.

The highlight is the race for Seoul mayor, a high-profile position that leads to national exposure. The incumbent president Lee Myung-bak served in the position before running for the top office.

As of 5 p.m., 11 hours after voting began, about 37.2 percent of the capital's nearly 8.4 million eligible voters had voted, the National Election Commission (NEC) said.

Turnout is slightly lower than the 37.7 percent recorded at the same hour in last April's by-election race for a parliamentary seat at an electorate in Seongnam near Seoul.

But Wednesday's turnout was especially high among voters living in the city's three well-off districts in southern Seoul with over 30 percent as of 3 p.m., according to the NEC. The areas are a traditional support base for the conservative GNP.

Recent surveys showed the two top candidates running neck-and-neck. The GNP's Na Kyung-won, a 47-year-old former judge, has run a fierce campaign against her rival, Park Won-soon, the opposition-backed independent candidate, over the past weeks.

The main opposition Democratic Party (DP) was unable to field its own candidate as Park, a 55-year-old lawyer-turned-activist, won a primary of opposition parties to become a unified candidate.

The Seoul mayorship was vacated when former Mayor Oh Se-hoon stepped down after he failed to downsize an opposition-led free school lunch program in the city's first referendum in late August.

The mayoral race is seen as a litmus test for next year's presidential election because two top potential contenders for the highest office have thrown their weight behind the rival mayoral camps.

Star IT entrepreneur Ahn Cheol-soo, who has no political experience, has suddenly emerged as a potential presidential contender and openly backs Park, the civic activist.

A victory by Park, an independent, would prove Ahn's political power as a potential presidential candidate and deal a serious blow to party politics.

If Na wins, it would help consolidate Park Geun-hye's position as a top presidential contender and the GNP's power as a party holding the presidency and the parliamentary majority.

Experts say a high voter turnout would be a boon to Park, as the key question now is over voter turnout among young people, who heavily support the opposition-backed candidate.

Election officials expect the final turnout to be well over 45 percent if the current trend continues.

President Lee Myung-bak visited a polling station near the presidential office in central Seoul together with first lady Kim Yoon-ok. He paid much attention to voter turnout for the Seoul mayoral race, asking officials there whether the rate was at the usual level or not, but made no further comment on the election.

The mayoral candidates also cast their votes early in the morning.

"I did my best. ... I will await the outcome, keeping in mind the old saying that heaven helps those who help themselves," Na told reporters after casting her vote.

Park said he will humbly wait for the citizens' "reasonable" choice.

"I stuck to my own principles and did my best to do so till the last minute," he said.

In terms of other races, political watchers said the results in the southern port city of Busan and conservative stronghold of Daegu would serve as good indicators of public sentiment for the rival parties ahead of next year's parliamentary votes.

Two mayoral seats are also up for grabs in the Chungcheong provinces, which cover parts of the west coast and center of the country.

Voting will last until 8 p.m., according to the NEC. It predicted that preliminary results would become available at around midnight.

GNP Chairman Hong Joon-pyo called for active participation from all citizens of Seoul in voting, but warned of viewing the election as the run-up to next year's presidential poll.

"This election is for picking Seoul mayor, not for choosing a candidate for the presidential race," Hong told reporters, emerging out of a polling station where he voted.

Sohn Hak-kyu, chairman of the DP, said citizens' anger at the ruling party will be expressed in the election.

"The date Oct. 26 will become a historic turning point in the creation of a new society," he said during a party meeting.

The web sites of the NEC and Park Won-soon were shut down for several hours in the morning as they came under a distributed denial-of-service (DDoS) attack, NEC officials said, adding police probe was under way.

"The Web site is now operating normally," one of the NEC officials said, requesting to remain unnamed. "We, in cooperation with relevant government organizations, are trying to know who is behind the attack," the official added. (Yonhap News)