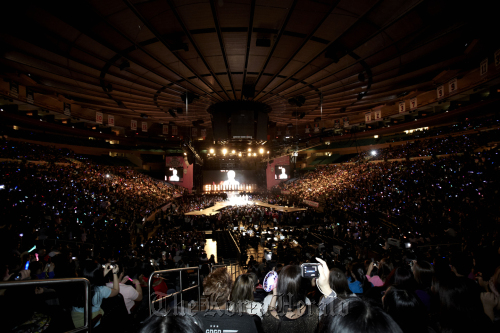 The nation’s largest entertainment agency has held concerts at seven major international venues since the first SM Town concert in Seoul in August 2010.

The 15,000 seats at Madison Square Garden ― priced between $44.50 and $204.50 per person ― all sold out, the agency said. The massive concert venue is a “dream stage” for many international pop stars. Michael Jackson, Beyonce, Lady Gaga and Taylor Swift have performed at the venue, which is also home to the New York Knicks basketball team. 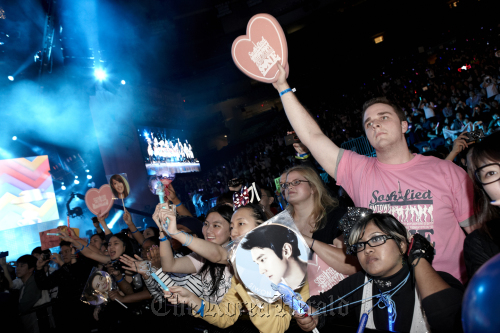 Fans cheer at the SM Town Live World Tour at the Madison Square Garden in New York City on Sunday. (S.M. Entertainment)
F(x) opened the stage with “La Cha Ta” and all the artists united for a finale with H.O.T’s hit song “Bit” (Light).

The SM Town concert was the first concert at Madison Square Garden since its makeover, the agency said.

The SM Town concerts have played a significant role in creating the new Korean Wave around the world, prompting fans of K-pop to request concerts through flash mob protests.

The SM Town concert at the L.A. Staples Center in September made the Top 10 of the Billboard Boxcore chart by selling 15,000 tickets. More than 70 percent of the audience was non-Asian, according to S.M.