[ The Korea Herald – Send E-mail ]
Port wine keeps its past, looks for future
By Korea Herald
Published : Oct 24, 2011 - 18:58
Updated : Oct 24, 2011 - 18:58
PINHAO, Portugal (AP) ― When Dominic Symington looks out from his shady hillside garden across the vineyards of Portugal’s majestic Douro Valley, he sees centuries of family and European history.

British families like the Symingtons have been at the heart of this northern Portuguese region’s port wine trade for generations. Dominic Symington, one of seven in the family wine business, has an ancestor ― Walter Maynard ― who shipped port to Britain in 1652.

Port, Symington says in an impeccable British accent, is a “way of life” for his family and tens of thousands of farmers along the River Douro.

The syrupy after-dinner drink has long been a hallmark European product, like Parma ham, Greek feta or French champagne. The business has withstood foreign and domestic wars, economic depressions and a 19th-century plant blight that wiped out many of the continent’s vineyards.

The 21st century is no less challenging. Shifting consumer fashions and financial crises in places where port has always sold well have crunched earnings and cast a cloud over the trade’s future. That is forcing producers to step outside their comfort zone and explore distant new markets.

After a decade of slow but steady decline, annual revenue last year was 44 million euro lower than in 2000, at 370 million euro, and 12 million fewer bottles were sold compared to that year, according to the Association of Port Wine Companies, an industry group.

“The trade is clearly going through a difficult time,” said the 55-year-old Symington, who describes himself as Portuguese “born and bred.”

Port producers are trying to put the brakes on their slide, and some 100 kilometers down river from Symington’s riverside house at Pinhao there’s a glimpse of where part of the solution could lie.

By the docks in Gaia, where the Douro meets the Atlantic and where sailing ships once departed heavy with wine barrels, two dozen middle-aged Brazilian tourists chatter delightedly at a port tasting. They have just been on a tour of a port “lodge” ― a warehouse containing thick 19th-century ledgers tidily kept with quill pens and where wine slowly matures in aged vats made of oak, mahogany and chestnut.

Aparecida Gilioli, a tour operator from Curitiba in Parana state, reckons the social aspirations of booming Brazil’s swelling middle class will broaden the market there for top-drawer goods like port.

Buckingham Palace usually serves port at state banquets, and it was on the menu when Queen Elizabeth II hosted President Barack Obama in May. That kind of patronage lends port distinction.

Part of the trade’s problem is that about 80 percent of production has traditionally been swallowed up by five main markets ― France, the Netherlands, Portugal, Belgium and the United States. Britain, the historic main market for port, ranks sixth these days.

The worst financial crisis in living memory has helped squash sales in those countries. For many consumers, port is a luxury they can do without. Added to that, lifestyle changes have to some degree made the high-calorie drink unfashionable as consumers watch their waistline.

In the last century Symington Family Estates exported port to around 20 countries. Now, it’s selling in more than 80. The new destinations include cash-rich emerging markets where the producers are coaxing Brazilians, Russians, Chinese and Angolans to put port on their table.

The signs are promising. Port wine sales to Brazil rose more than 31 percent in the first half of this year, to 2.4 million euro, making it a Top 10 importer. It’s not enough to take up the slack, though.

Producers are also pushing port in gimmicky new cocktails, such as white port with tonic water, a twist of lemon and ice, that might appeal to a younger crowd. It’s a novelty the trade’s forebears might have found sacrilegious.

Symington, though, says it’s an inevitable development. Porto has long banked on its prestige and aristocratic conventions, such as always passing the port to the left at formal dinner parties, but now it needs to shed its stuffy image, he says.

“We have to de-formalize port,” said Symington.

British exporters built up the local wine trade after Britain went to war with France in 1678, losing access to French wines. The story goes that the British added grape brandy to the Douro wine to prevent it spoiling at sea. That made it 20 percent proof ― almost twice as potent as table wine ― and especially sweet by halting fermentation while the wine is still fruity.

Port has also drawn distinction from its upmarket price.

The lower-grade ports, called ruby, tawny and late-bottled vintage, usually carry a price tag of around $14-$35.

A “vintage” port, so called because it came from a grape harvest that was exceptionally good, carries a heftier charge. The vintage is the Rolls-Royce of port wines, and something like the Symington’s prize-winning 2007 version costs around $140. Port gets better with age, and its price climbs with the years. The legendary 1963 vintage ― the one served to President Obama ― comes in at around $415. Taylor’s Scion, from 1855, goes for around $3,475 a bottle.

The Douro Valley is one of Europe’s smartest addresses for wine and one of the world’s oldest demarcated wine regions, dating from a 1756 law.

The vineyard estates, called “quintas,” are reached by narrow, winding roads that trace the contours of the Rio Douro, the Iberian peninsula’s third-longest river which enters from Spain, where it is known as the Duero. 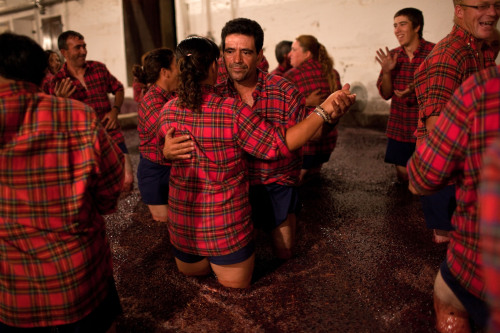 Grape-pickers dance while treading grapes in a traditional stone tank at Quinta do Vesuvio vineyard on Sept. 19 near the village of Foz Coa, northern Portugal. (AP-Yonhap News)
During the fall grape harvest, local grape-pickers move slowly along the rows of vines that ripple uphill from the broad river. Starting just before the sun comes up over the surrounding high ridges, they dip their hands into the bushy vine leaves that are turning auburn and snip off heavy bunches of grapes that are sweet as jam.

Some 30,000 farmers along the valley use generations of know-how to produce wine which runs like a thread through local history. They rely on the lump sum from the harvest to help see them through the year.

Wine “is our daily bread,” says 46-year-old Maria Augusta, taking a 9:30 a.m. break for a meal of bread and thick soup at the Symington family’s Vesuvio vineyard, located between two 12th-century castles.

Times for these workers are suddenly hard. The government has hiked taxes and cut welfare entitlements to save money as part of a 78 billion euro bailout earlier this year that spared Portugal from national bankruptcy.

At the same time, authorities have slashed permitted wine production levels this year by more than 20 percent. That measure aims to get rid of stocks left over as sales fell and that could drive the retail price lower.

Port companies are trimming their costs and mechanizing production.

Officials concede there’s no quick fix, but nobody is despairing yet. The business has come through plenty of tough times since Romans planted vines in this patch of their empire they called Lusitania.

“Port has endured very bad crises,” says Isabel Marrana, executive director of the Association of Port Wine Companies. “It’s resilient, it’s a survivor. We have to do what our ancestors did ... and persevere.”