Clad in blue jeans and wearing his Ray-Bans, Janek Ledecky isn’t used to walking down the street without being recognized.

“Here, I feel like I am a secret agent or something (because no one notices me),” the Czech pop superstar told The Korea Herald in Seoul, Wednesday.

In his home country, taking public transportation would be unimaginable for Ledecky.

“My fans wouldn’t leave me alone,” he says.

The 49-year-old star, who came to stardom as the front man of his university rock band in 1987, is rather used to screaming crowds, fanatical fans and being the center of attention. It is easy to tell what his life has been like, just by watching him pose during the photo shoot for this story. With tons of attitude and effortless showmanship, his star demeanor is obvious.

Ledecky is in Seoul for the third time, to attend the opening of his musical “Hamlet” at Universal Arts Center on Thursday. It was the very first musical he ever wrote in 1998, with no previous musical theater experience whatsoever.

“I had no ambitions to write musicals at all,” he says, smoothing his brown hair. 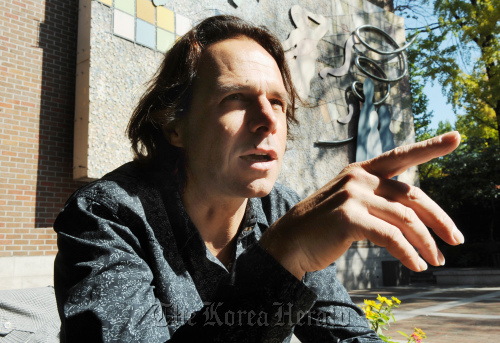 Popular Czech singer and composer Janek Ledecky, who directed the musical “Hamlet,” during an interview with The Korea Herald in Seoul, Wednesday. (Park Hyun-koo/The Korea Herald)
“I was writing songs for myself and other singers, while throwing concerts at the same time. I was really just enjoying that life.”

Things changed when his music producer Martin Kumzak visited him with an old copy of the Shakespearean play in 1998.

“The book was the same edition that I read when I was 12 in my mother’s home library,” he remembers. “And I said, why not? Why not tell this great story in contemporary music and language? So I took a year off just to work on it.”

The musical, which made its debut in his home country in 1999, was a huge success in Prague and Bratislava, Slovakia, attracting some 10 million people over the next six years. The musical eventually made its way to Broadway in 2003, after a year-long adaptation process with Robert Johanson, a New-York based musical director.

Having listened to The Rolling Stones and Bob Dylan religiously growing up, Ledecky did not hesitate to use rock music for the Shakespearean tragedy.

“I would not say this musical is a Czech musical,” he says. “I don’t find any Czech music roots in it. It’s a universal piece with much rock ‘n’ roll spirit.”

The musical’s Korean adaptation made its debut in Seoul in 2007, and was a hit in 2008 and 2009. Robert Johanson directed the U.S. adaptation of the show, the 2008 Korean version, as well as the latest show which opened Thursday.

And the star clearly sees the rock ‘n’ roll spirit in Korean audiences.

“There were a lot of teenage girls dressed in uniforms who came to watch the 2007 show,” he says.

“And during the love scene between Ophelia and Hamlet, the girls stood up and screamed as if they were attending a Michael Jackson concert. And that’s rock ‘n’ roll, right there.”