The Seoul-based company on Thursday introduced the Eon, its cheapest model in India so far, with a price starting from 269,999 rupees ($5,496). Maruti Suzuki India Ltd., which sells the nation’s best-selling Alto car starting from 235,413 rupees, unveiled a version of the model with features including leather seats and an upgraded audio system on Thursday.

Hyundai, led by chairman Chung Mong-koo, has gained market share worldwide from Toyota Motor Corp. and Honda Motor Co. as Japanese carmakers reel from a strong yen and disruptions stemming from the record earthquake that devastated the country in March. The move raises the pressure on Maruti Suzuki, which has seen its share of Asia’s third-largest car market drop amid mounting competition and a labor strike that’s hobbled output. 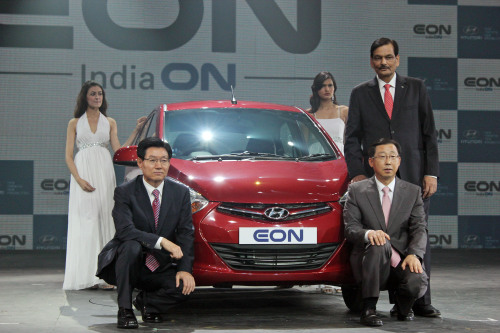 Hyundai Motor unveils the Eon, its cheapest model in India, on Thursday. (Yonhap News)
Hyundai expects to sell 140,000 to 150,000 Eon cars a year, Arvind Saxena, Hyundai’s India director for sales and marketing, said at a press conference in New Delhi on Thursday.

Compacts and mini-cars accounted for more than 75 percent of total passenger-car sales in the nation in the year ended March 31, according to data released by the Society of Indian Automobile Manufacturers. Maruti had 43 percent of the total Indian passenger-car market in the six months ended September, compared with 20 percent for Hyundai, the data show.

“I will refrain from commenting on the Eon until we see the car,” Mayank Pareek, head of sales at Maruti, said by phone. “We’ve always been saying that India will be a small car market. Now everybody is getting into small cars.”

The industry group lowered its growth forecast to as low as 2 percent for the year ending March 31. In July, the group said it expected sales to rise 10 percent to 12 percent.

Deliveries are forecast to grow at the slowest pace in three years after the Reserve Bank of India raised interest rates 12 times since mid-March 2010 to rein in inflation, driving down demand for cars in a country where about 80 percent of purchases are funded by loans.

“With rising interest rates and fuel prices, people will opt for cheaper and more fuel efficient cars,” Saxena said. “The Eon should be the best-selling model in the near future.”

The Korean automaker’s India passenger-car sales rose 5 percent to 180,616 in the first six months of the fiscal year, bucking a 1.4 percent industrywide sales decline, according to data from the industry group.

The Indian unit of Suzuki Motor Corp. stopped production at its factory in Manesar, near New Delhi, on Oct. 7, the third time since June, when the workers went on strike for 11 days to demand recognition of an employees’ union and better working conditions.

The disruptions have taken a toll on deliveries, which fell 12 percent to 390,878 cars in the April to September period, according to the industry group.

The introduction of the Eon “will increase the competition in the segment,” said Yaresh Kothari, an analyst with Angel Broking Ltd. in Mumbai who has an “accumulate” rating on Maruti. “Hyundai still doesn’t have the kind of reach Maruti has, but it will be tough for Maruti.”