[ The Korea Herald – Send E-mail ]
Regional twists keep GM designs global: Welburn
By
Published : Oct 16, 2011 - 19:39
Updated : Oct 27, 2011 - 19:02
DETROIT ― General Motors Corp. may be renowned for its mass scale of production across 140 countries, but little is known of its ability to differentiate designs across regions.

GM designs are found in all regions, but there are unique twists in Korea, China, Thailand and India to suit local driving habits and cultural tastes, Edward Welburn, design chief of GM said.

“It’s our top priority to cater to customer needs and wants, and we deliver that. What could be so popular in some countries can be offensive in others,” the veteran designer with almost four decades of experience at the company said.

The Chevrolet Spark dressed in Monaco Pink, currently only available in Korea, is an example of a style twist now in demand globally.

The subcompact in pink adopted by GM’s Korean designer Kim Myung-hee stands out on the streets full of dull grays and whites, appealing to young female drivers.

“Spark, created in Korea, has got an emotional connection to the Korean team which has applied Korean taste to the model,” Welburn said. 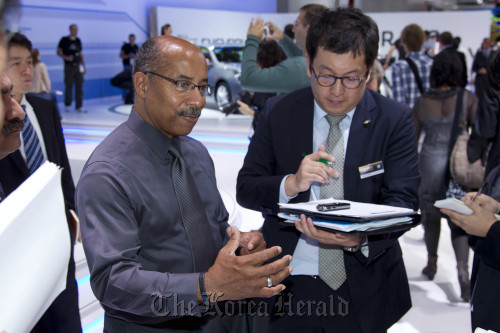 “It has been so popular that the color has been requested by our GM offices in Australia, Europe and U.S. I believe some of them will adopt the color soon,” said Katherine Sirvio, GM’s global head designer.

Who owns the car also matters. Buick Lacrosse, GM’s luxury midsized sedan, has a bigger backseat and rear sun shades with a wider screen at the back in China because a lot of GM cars there are driven by hired drivers. The Buick Lacrosse in China has audio, air conditioning and other controls in the back seat.

“We made similar adjustments for India too. Spark, known as Beat in India, is mostly a family car even though it’s a subcompact, so we placed bigger back seats for our Indian models,” Welburn said.

“These modifications were needed because their purpose of owning a car is quite different from, say, U.S., where drivers mostly care about front seat and not the back seat as they spend most of their time at the front,” Welburn added.


Welburn said GM has no plan for launches just for Asian customers despite the group’s plan being ever more focused on China, India and Korea going forward.

“At the moment we don’t have plans to launch new models for specific regions,” Welburn said.