Cruz made a rocket throw to keep the score tied, then hit a crushing three-run homer in the 11th inning off Jose Valverde that helped send the Rangers over the Tigers 7-3 Wednesday night for a 3-1 lead in the AL championship series. Napoli had put Texas ahead with an RBI single earlier in the 11th.

Cruz, whose grand slam in the 11th inning won Game 2, once again starred for the Rangers in a game delayed at the start for more than two hours by rain.

With Detroit runners at the corners in the eighth and the score 3-all, Cruz caught Delmon Young’s flyball to right field and made a strong peg to Napoli, the catcher, to nail Miguel Cabrera.

“For you guys that haven’t seen Nelson every day, he’s capable of doing exactly what he’s doing,” Texas manager Ron Washington said. “We’ve been waiting for it for a long time, and as I always say, I don’t judge Nelson just because he hits balls out of the ballpark. He’s a complete player. He takes pride in every part of the game.”

Napoli blooped a go-ahead single in the 11th and Cruz soon added his fourth home run of the ALCS. Cruz became the first player in major league history to hit a pair of extra-inning homers in the same postseason series. 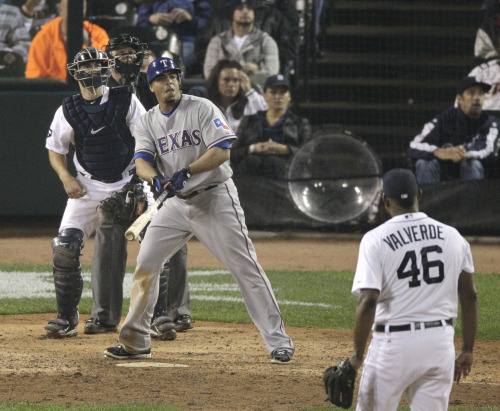 Texas Rangers outfielder Nelson Cruz watches his three-run home run in the 11th inning. (AP-Yonhap News)
The ALCS has marked quite a turnaround for Cruz. After going just 1 for 15 in the first-round playoff win over Tampa Bay, he’s 5 for 14 with nine RBIs in only four games against the Tigers ― and seven of those RBIs have come in the 11th inning alone.

Brandon Inge hit a solo home run in the Detroit seventh that tied it. The Tigers wasted a terrific chance an inning later following some risky Texas strategy.

With one out and nobody on, the Rangers intentionally walked Cabrera, practically daring the rest of the struggling Detroit lineup to beat them. The AL batting champion hit a two-run double earlier in the game, in fact.

Victor Martinez, who hurt his ribcage on a home run swing in Game 3, followed with a single to right and Cabrera lumbered around to third.

“I respect Martinez a heck of a lot,” Washington said. “Once again, he got that base hit and we almost paid for it, but I certainly wasn’t going to let (Cabrera) have a swing of the bat there and beat us.”

Young, another Tigers starter who has been banged up lately, managed to lift the ball to medium right. Cruz caught it and made a perfect, one-hop throw to the plate that beat Cabrera by several feet.

Cabrera bowled over Napoli, to no avail. Napoli held onto the ball and Cabrera never touched the plate.

“We throw to the bases every day,” Cruz said. “We take flyballs every day, make sure we know the ballpark, we know any situation we can be involved in during the game. When you prepare, everything comes more easy.”

ST. LOUIS (AP) ― Albert Pujols hit an RBI double during a four-run first inning and the St. Louis bullpen bailed out Chris Carpenter as the Cardinals beat the Milwaukee Brewers 4-3 Wednesday night for a 2-1 edge in the NL championship series.

In a matchup of aces, neither Carpenter nor 17-game Yovani Gallardo made it past the fifth. The one-run lead Carpenter handed over was just enough, as four relievers combined for four perfect innings.

Fernando Salas, Lance Lynn, Marc Rzepczynski and Jason Motte shut down the Brewers to close out the victory. Motte, who had two saves lasting more than inning in September, got four outs for this save and fanned pinch hitter Casey McGehee to end it.

Carpenter won his seventh postseason game to tie Bob Gibson’s franchise record, but with none of the brilliance of his three-hit shutout over Roy Halladay and the favored Phillies in the deciding game of the division series. He lasted only five innings, with nearly half of his 89 pitches for balls.

The starters’ ineffectiveness was surprising considering their track records. Carpenter has been clutch throughout his career in the postseason, going 7-2 with a 3.14 ERA in 12 games. Gallardo allowed only two runs in 21 innings, a minuscule 0.86 ERA, before Game 3.