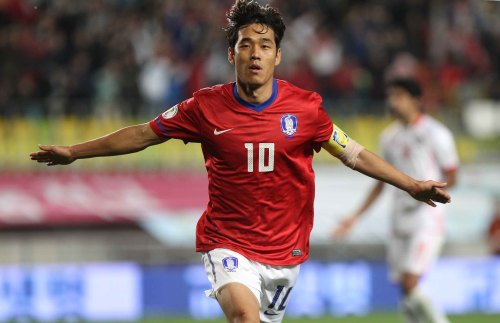 The senior team, led by head coach Cho Kwang-rae, secured the third straight victory in the penultimate round of the continental qualification by winning the match against the UAE 2-1 in Suwon, 46 kilometers south of Seoul.

With no goals scored during the first half, Korean senior team captain Park Chu-young netted the country its first goal in the first five minutes of the second half.

The second goal was secured around midway through the second half as Ki Sung-yueng's corner kick led to a goal after hitting UAE defender Hamdan Al Kamali in the head.

Bucking South Korea's domination, the UAE's Ismail Matar secured his first goal close to the end but failed to turn the tide.

With the latest victory, Korea retained its top rank in Group B with seven points. The country beat Lebanon 6-0 at home and drew Kuwait 1-1 on the road last month.