Scriptwriter Kim and director Jung have most recently carved a niche for themselves in the family drama market with hit series like KBS’ “Mom’s Dead Upset” and SBS’ controversial-yet-popular “Life is Beautiful.”

Now the two aim to topple viewers with a sentimental sob fest.

Director Jung hinted at the tear-ridden slant of the series at the drama’s press conference in Mokdong, Seoul on Tuesday, stating that he thinks “it will turn out to be an incredibly sad story.”

The weight of the sorrow rides on heroine Lee Seo-yeon’s shoulders, who is diagnosed with Alzheimer’s. 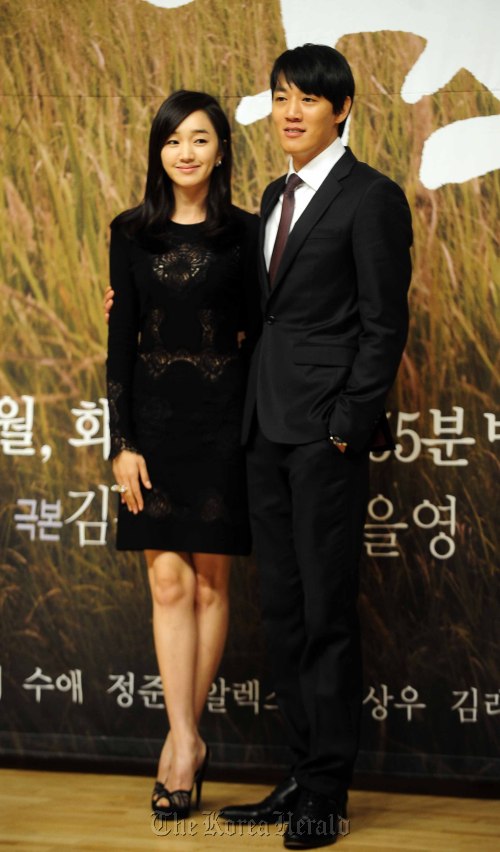 Kim Rae-won (right) and Su Ae attend press conference for “A Thousand Day’s Promise” in Mokdong, Seoul on Tuesday. (Park Hae-mook/The Korea Herald)
The brief four-minute highlight reel that ran at the drama’s press conference etched out an inkling of the emotional unraveling Seo-yeon (Su Ae) faces as she realizes she is losing her ability to remember.

Having proven her mettle at playing doomed heroines in works like the 2006 flick, “Once In A Summer.” Su Ae looks more than up to task.

“My character is aggressive and free-spirited enough to love a man engaged to another woman,” the 31-year old actress said, stressing the strong and peppy characteristics of the heroine, a quality that promises to keep her character from becoming a soppy rag of emotion as she faces her condition.

“She wants to hang on to love and experience it until the very last moment, when she loses her memory,” Su Ae added.

Every great love story has its devoted knight, and actor Kim Rae-won is playing hero Park Ji-hyung, a man who refuses to let anything dampen his love for the leading lady.

Though Park is a slightly stand-offish architect, said Kim, he is capable of loving one woman “completely and purely.”

Of co-star Su Ae, Kim said he “was delighted to hear that she was cast in the drama” before he signed on.

“I had been wanting to work with her and I thought that she was a perfect fit for the role,” said the 30-year old actor.

Looking a bit peaked and tense in a black suit, Kim did not delve deeply into the recent scandal that broke less than two weeks ago.

Rumors abounded that the star had allegedly assaulted a room salon employee, just over a month after he had completed his two years of military service.

Kim’s agency, Bless Entertainment, quickly quashed the rumor, stating that Kim had not assaulted anyone and had merely attempted to mediate a verbal altercation between an agency rep and an employee at a bar.


At the press conference, Kim apologized for any inconvenience he may have caused the crew and cast of “A Thousand Days’ Promise.”

Following the brief apology, Kim fielded questions about his role and about working with co-star Su Ae.

“Director Jung advised me not to take my eyes off of Su Ae even when I’m not acting, and that’s what I’m doing,” Kim said, in half-jest.

The highlight reel showed chemistry in spades, hinting at many a steamy scene to come.