LONDON (AP) -- Former Beatle Paul McCartney and American heiress Nancy Shevell were married on Sunday, emerging joyously from a 45-minute civil ceremony to be showered with confetti from fans.

The pop icon raised his bride's arm in triumph as they blew kisses to the hundreds of fans and paparazzi waiting on the steps of the Old Marylebone Town Hall for the big event. 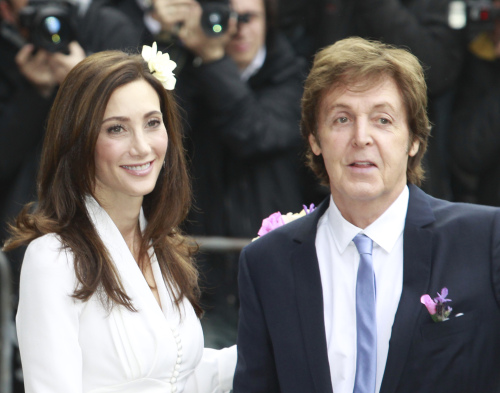 Former Beatle Paul McCartney and American heiress Nancy Shevell arrive at Marylebone Town Hall in central London to be married Sunday. Shevell, 51, is McCartney`s third wife. They were engaged earlier this year. The couple met in the Hamptons in Long Island, New York, shortly after the singer`s divorce from Heather Mills in 2008. (AP-Yonhap News)

Shevell, with a white flower in her long dark hair, wore an elegant, understated above-the-knee gown designed by McCartney's daughter, Stella. He wore a blue suit, a pale blue tie, and a gigantic grin.

The former mop-top wore his tinted hair longish for the occasion, bringing back memories of the days when girls swooned as he sang ``All My Loving'' and other boy-meets-girl hits.

The loving couple, beaming and relaxed, drove off in a burgundy Lexus for a gala reception at their nearby home in the St. John's Wood neighborhood. Champagne and cake awaited, along with guests like Ringo Starr, in a casual black T-shirt under his fitted suit, and his wife, the actress Barbara Bach.

There was a bit of deja vu for McCartney _ he married his first wife, Linda Eastman, at the same place in 1969, breaking the hearts of teenage girls throughout much of the world.

Details of the ceremony have not been released. Press reports suggest McCartney's younger brother Mike served as best man and his young daughter Beatrice as flower girl.

A tent had been set up at McCartney's house, and party decorations were delivered for a reception after the ceremony.

Shevell, 51, is McCartney's third wife. They were engaged earlier this year. The couple met in the Hamptons in Long Island, New York, shortly after the singer's divorce from Heather Mills in 2008.

It is Shevell's second marriage. She seemed relaxed and radiant as she arrived for the ceremony, waving easily to the crowd.

Shevell, who is independently wealthy, was married for more than 20 years to attorney Bruce Blakeman and serves on the board of New York's Metropolitan Transportation Authority. She also is a vice president of a lucrative New Jersey-based trucking company owned by her father.

McCartney married Eastman, a talented photographer who specialized in rock and roll portraits, at the height of the hippie era, when the Beatles were at the apex of their global fame.

The marriage of the Beatle known as ``the cute one'' caused young women and girls to burst into tears outside the registry office, and broke the hearts of uncounted fans throughout the world.

While many rock and roll marriages from that era broke down, the McCartneys enjoyed a long, happy marriage for many years, raising four children and spending virtually every night together except when McCartney was briefly jailed in Japan on marijuana charges.

Linda played and sang in his successful post-Beatles band Wings _ even though critics thought she added little to the ensemble _ and used her marriage to a Beatle to promote vegetarianism and other causes that were also backed by McCartney.

Her life was cut short by breast cancer in 1998, leaving McCartney adrift.

Mills then entered the picture. They married in 2002 at a gala affair at an Irish castle, and soon after had a daughter. But the marriage collapsed fairly quickly and ended with a bitter divorce in 2008.

Mills publicly accused McCartney of cruelty and sought a massive $250 million divorce settlement, but the judge sided with McCartney, calling her claims exorbitant.

The British public, enamored of the sunny Sir Paul since his early Beatle days, also sided with the singer.

The case offered a rare glimpse into the magnitude of McCartney's fortune, which includes songwriting royalties from a raft of classic tunes, many co-written with the late John Lennon, who would have turned 71 on Sunday.

Court papers filed by McCartney at the time indicated he had a net worth of approximately $800 million, including a valuable collection of art works including paintings by Picasso and Renoir along with luxury real estate holdings and sound music investments going well beyond his own works.

The impending marriage of one of the most enduring figures in British cultural life sparked Britain's fevered tabloid headline writers to try to come up with new puns on Sunday based on the Beatles' memorable song titles.