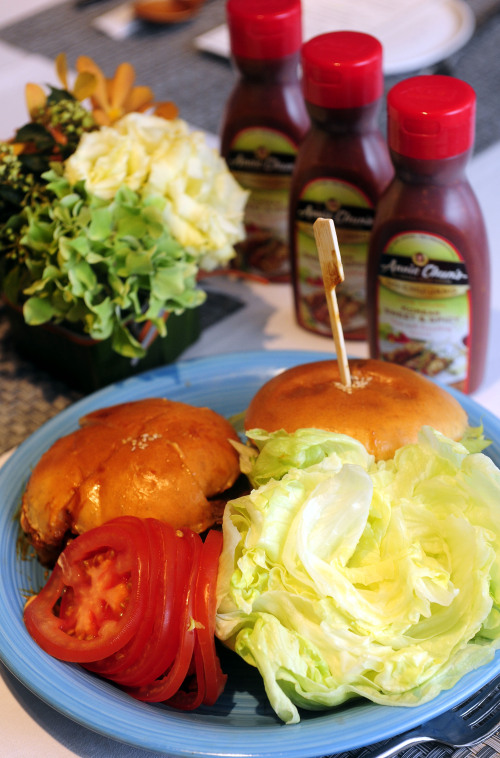 Some people are just born to cook.

The Iowa native has no formal culinary training. He learned what he knows from watching his wife Suellen work her magic in the kitchen and from his own personal passion for food. So imagine his surprise when he found out he won Annie Chun’s Gochujang Spicy Burger contest.

After entering his glazed gochujang burger with ginger-lime aioli in the competition, he received an email telling him the good news.

“I had to read it four times,” Suellen said, remembering how surprised she had been when she saw the email.

The challenge was to incorporate CJ CheilJedang Corporation’s U.S. brand gochujang sauce into a burger.

“I used it in the meat itself to make the patty. I used it as a barbecue sauce. I used it with soy sauce, ketchup and honey and some lime juice. And I also made an aioli spread for the buns.”

Not only did Calhoun bump up the flavor of the burger with the European garlic mayonnaise, he also put mint and lime juice into the patty.

When he made it for friends, he served it with kimchi on the side, instead of French fries.

The recipe beat over 200 contenders, making it through the first cut, where 16 were selected, and then through the final cut, earning Calhoun a trip to South Korea for two.

Calhoun and his wife Suellen arrived with son Joshua (who came on his own budget) on Sept. 30 and finished off the last leg of the CJ-sponsored trip on Oct. 4 before continuing their exploration of South Korea on their own.

While this was his first time here, the contest was not the first time Calhoun had encountered gochujang.

“You know I have good Korean friends,” the 57-year-old artist revealed how he had had plenty of opportunities to enjoy Korean food. 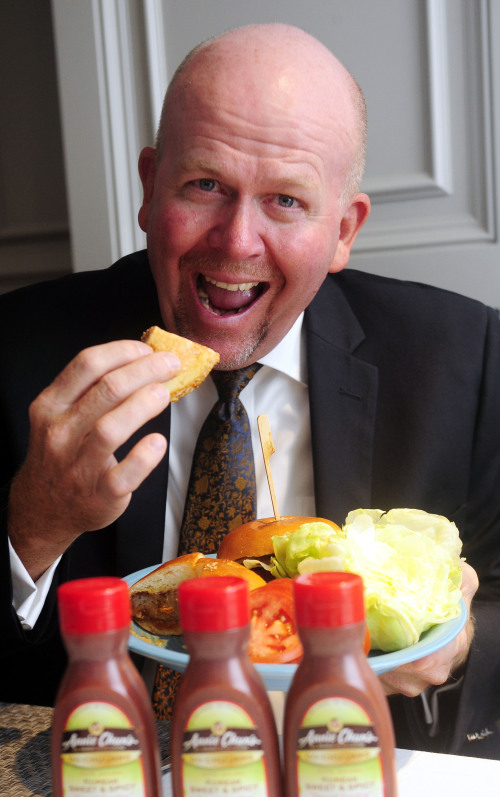 Burger contest winner Jim Calhoun takes a bite out of his own creation during his prize trip to South Korea in Seoul at CJ Foodworld on Tuesday
Calhoun is not alone in his fascination with Korean cuisine. In fact, it was his wife who tipped Calhoun off about the contest, and as Jim, Suellen and Joshua sat down to a meal at CJ Foodworld in Seoul on Tuesday, she raved about the fresh ginseng and mountain yam salad, proclaiming how it would be a shame to miss out on this delicious dish, and also said she enjoyed the makgeolli (Korean rice wine) she tasted during her trip here.

Jim’s son Joshua liberally stacked pieces of chili and raw garlic into his suyuk (Korean boiled pork) and talked positively about their visit to the Noryangjin Fisheries Wholesale Market where they dined on sashimi.

Joshua also squirted Annie Chun’s Gochujang over the pizza that was served as part of the lunch.

Of Annie Chun’s Gochujang, which was the focus of the contest, Jim said he’s sure it’s popular where it is currently available in America and that he thinks it will be well-received in the wider U.S. market.

Prepare a medium-hot fire in a charcoal grill with a cover, or preheat a gas grill to medium-high.

To make the Ginger-Lime Aioli: Combine all of the ingredients in a bowl and mix well. Cover and refrigerate until serving.

To make the burger patties: In a large bowl combine the Annie Chun’s Gochujang Sauce and lime juice. Add the ground chuck, onion, mint and salt. Mix well. Divide the mixture into six equal portions, and form into patties appropriate for your buns. Cover with plastic wrap.

To make the glaze: Combine the Annie Chun’s Gochujang Sauce, soy sauce, catsup, honey, and garlic in a small saucepan that is usable on a grill. Whisk the cornstarch and lime juice in a small bowl; and add to the mixture. Place on the grill rack; and stir the mixture until it boils. Set the glaze aside.

Place the patties on the rack, cover, and cook until browned on the bottom. Turn the patties; and brush the cooked side with glaze. Cook; turning and brushing with liberal amounts of glaze. Place the buns on the grill and toast.