So much for all that history. 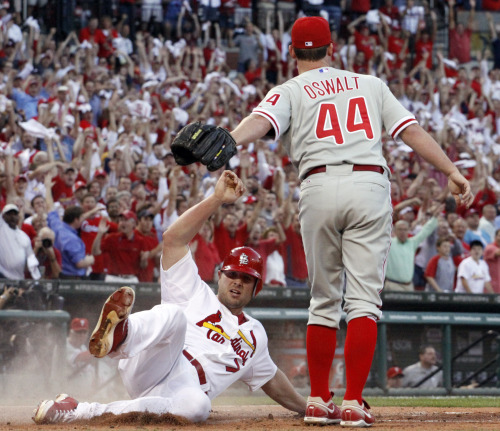 Roy Halladay, who won the opener for Phillies, will face the Cardinals’ ace, Chris Carpenter.

“It might be fitting that it goes down to a fifth game,” Phillies manager Charlie Manuel said.

Cardinals starter Edwin Jackson gave up two runs on his first five pitches, then shut down the Phillies over six innings. Jason Motte pitched a perfect ninth for his second save of the series.

It was a rare struggle at Busch Stadium for Oswalt, who was often dominant in St. Louis in his many years in Houston. Oswalt gave up five runs on six hits, striking out five. He walked one batter and hit another, and they both scored.

“It’s good to get some early runs for sure,” he said. “I felt pretty comfortable after that ― just two bad pitches.”

The last time Oswalt pitched in the postseason in St. Louis was for Houston in Game 6 of the 2005 NL championship series. Two days after Albert Pujols hit a monster homer off Brad Lidge to send that series back to St. Louis, Oswalt allowed just one run over seven innings in the 5-1 win that sent the Astros to their only World Series.