As its theme, the French government has chosen “France, its Coasts, its Oceans” and also unveiled their mascot for the expo named Sogeumi.

“Korea and France are both countries with a high respect for the ocean,” said French Ambassador Elisabeth Laurin during a press conference.

“In France we have over 1,900 kilometers of coastal waters, so there is a lot of affinity between the two countries and their people in subjects like the environment, high technology. That’s what we will find at our pavilion,” she added. 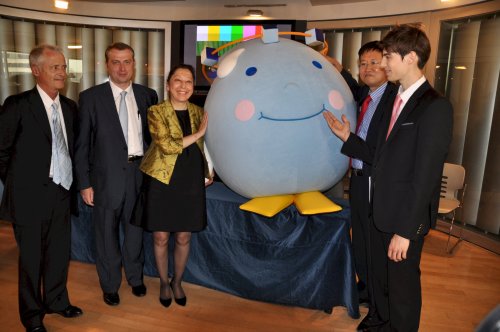 French Ambassador Elisabeth Laurin (third from left) is accompanied by (from left to right) President of COFRES Jose Freches who is in charge of the French pavilion,architect of the pavilion David-Pierre Jalicon, Laurin, the mascot Sogeumi, and Yeosu 2012 organizing committee director Kwon Young-dae. (Yoav Cerralbo/The Korea Herald)
Organizers of the world expo are predicting that 3 million visitors will attend, of which about half a million will be from abroad.

The French Embassy is hoping to attract 1 million visitors to its pavilion with the goal of presenting the country as a maritime superpower.

Visitors to the French pavilion will learn about the different beautiful spots found along the country’s coast.

The pavilion will also showcase French desalination technology. The French contingency will demonstrate the different processes seawater goes through before being transformed into drinkable water by using an animated version of their mascot Sogeumi.

The front side of the pavilion is made up of 300 hourglasses filled with moving salt to illustrate the time remaining before the world’s supply of drinking water is exhausted.

Once inside, visitors will follow Sogeumi on his journey.

In another room, visitors will see a small scale replica of the Sea Orbiter, a floating research laboratory intended to observe ocean life.

There will also be humanoid and aquatic robots peppered throughout the 845 square meter pavilion.

The expo will run from May 12 to Aug. 12 at the Yeosu New Port and Deokchung-dong, South Jeolla Province.