If visiting one of the Association of Southeast Asian Nations member states is on the cards, then check out the ASEAN Culture and Tourism Fair, which wraps up today at the newly opened D-Cube center in southwest Seoul.

There will also be food and beverages prepared by Southeast Asian embassies looking to lure Korean tourists and business people to their exotic locals.

Even with the economic crisis still rearing its ugly head, travel to Southeast Asia from Korea is still growing.

According to the ASEAN Secretariat, Korean tourist arrivals to ASEAN countries ballooned to 3.2 million last year, a 34 percent increase from the previous year.

What helped boost travel is the introduction of low-cost carriers increasing the number of flights while decreasing the price of tickets to some of the hottest spots in Southeast Asia.

“It’s a sign that Asian countries are getting closer,” he said. 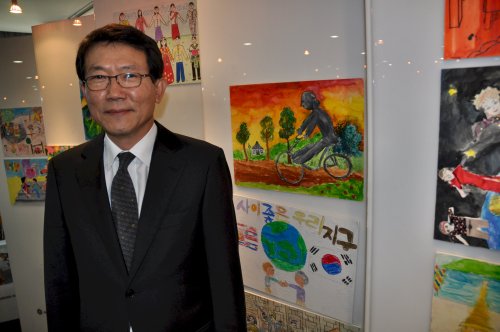 ASEAN-Korea Centre Secretary General Cho Young-jai (Yoav Cerralbo/The Korea Herald)
On the investment side, the center will continue to organize seminars showcasing the many business advantages of all 10 member states.

This year the center is planning to bring those investment seminars to provincial cities like Gwangju.

Until early next year, the center will host delegates from Brunei, Malaysia, Myanmar, Singapore (still in talks) and Thailand to discuss the advantages those countries have to offer to Korean business people.

Interest in these seminars has grown. Their last investment seminar, which examined business opportunities in Indonesia, attracted 147 applicants, a 47 percent increase from the previous year.

“We are also planning to dispatch investment missions to Myanmar, Brunei, Thailand, Philippines, Singapore, Cambodia and Indonesia starting from next month through December,” he said.

“We time these dispatches with big trade exhibitions in the respective countries,” Cho added. “This way, Korean businessmen have greater opportunities to create new businesses.”

While the theory is sound, Southeast Asian embassies have complained that the Korean government’s tough agricultural import regulations hamper trade.

The current policy permits the testing of one agricultural product at a time which generally takes about three years for either an approval or rejection.

“Of course, the government should address the problem of quarantine and even in the ASEAN-Korea free trade agreement, there seems to be very little concession in the import of agricultural products from ASEAN.

“What we are trying to do is promote and introduce ASEAN products,” he said.

Cho noticed that Korean importers are still learning about the spectrum of high-quality agricultural and consumer products available.

“So trade exhibitions and missions are meant to serve that purpose,” he said.

The center will also continue its outreach program to elementary schools by inviting ambassadors from the regional bloc to discuss and share their culture with students.

Also on the cards is the Bravo! ASEAN in Korea talent competition which aims to promote multiculturalism.

Hosted with Arirang Television, the preliminary tryouts will begin Oct. 22 with the main event to be aired on Nov. 19.

More information about the center at www.aseankorea.org.