Before the change in privacy settings, an action seen as confirming suspicions that he was indeed son of Kim Jong-il’s eldest son Jong-nam, the account showed several profile pictures of him.

The photos portrayed Kim in shock-blond hair, diamond earrings, necklace with a cross pendant and glasses. Other pictures showed him stylishly dressed and posing with his arm around a girl presumed to be his girlfriend at a party. Public signs of affection are largely thought to be taboo in the reclusive North, making the flashy appearances and other pictures that much more eye-catching. 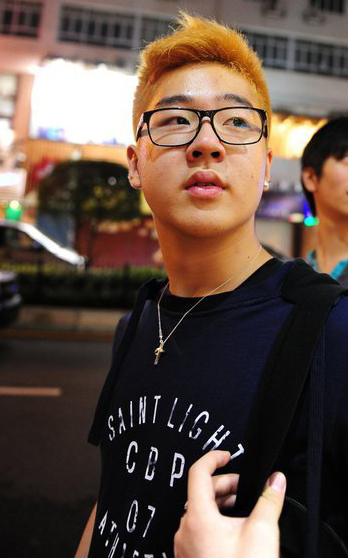 Kim Han-sol
The Facebook account also showed several endearing exchanges with an account under the name Kim Chol, which is suspected of belonging to the teenager’s father Kim Jong-nam.

Kim Han-sol had also posted on his account last May a question asking his friends whether they preferred communism or democracy, to which the North Korean citizen answered democracy.

A Twitter account under the profile names khsol616 and kimhs616 is also blocked to the public, only allowing confirmed followers to have access to his tweets.

Another blog which media reports said was Kim’s has photography, travel, food, wine and spa under his interests, and “Love Actually” and “Remember the Titans” as favorite movies.

Last Friday, Meri Musa, spokeswoman of the UWCiM, said that the school’s first North Korean will arrive in Bosnia upon visa approval, but fell short of explicitly confirming that it was the dictator’s grandson.

However, Musa added that the student is very excited about coming. Chairman of the school’s board David Sutcliffe issued a statement saying that a student from a “very well-known” North Korean family will be attending the school.

The school has 124 students from 34 different countries including Iraq and Palestine and is located 100 kilometers south of Sarajevo.

The branch is part of a British network of schools with tuition costs around 34,000 dollars.