[ The Korea Herald – Send E-mail ]
Aperitif is a civilized way to end hectic day, begin your evening
By
Published : Sep 30, 2011 - 18:51
Updated : Sep 30, 2011 - 18:51
As life gets ever more hectic, I rely more and more on the civilized custom of a before-dinner aperitif. Sometimes it’s all I can do to make it to that magical hour when I’m handed a Campari and soda or a glass of rose and take a first bite of dusky olive tapenade on toast.

An aperitif can be as simple as a glass of chilled fino or manzanilla sherry with a bowl of oil-slicked olives and roasted almonds. Or some vermouth or Fernet Branca on the rocks with a few slices of Fra’ Mani salame and thin slices of baguette.

If I have some ripe white peaches and a bottle of Prosecco knocking around, I might make Bellinis, but how likely is that unless I’ve planned well ahead. I also love a kir royale, like the one Lou Amdur makes at Lou, his Los Angeles wine bar, with an artisanal creme de cassis and Cremant d’Alsace rose.

Lately, though, I’m drawn to bitter ― that cooling Campari and soda or my new favorite, a classic Negroni: one part gin, one part Campari, one part vermouth di Torino. For a lighter version, I might top it off with the last of the Prosecco. 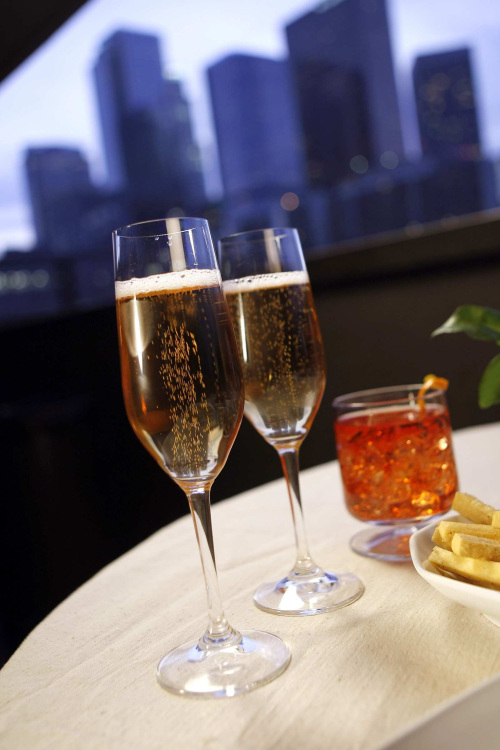 There is no better way to deal with the hectic pace of life than by slowing down with the civilized custom of a before-dinner aperitif. (Los Angeles Times/MCT)
What’s important too is that little bite ― call it tapas or pintxos or canape. Go to any bar in Venice, Italy, for example, for an aperitif and you’ll find a spread of cicchetti, the Venetian equivalent of tapas, laid out on the counter. In Spain, well, you could spend the entire night hopping from bar to bar, nibbling on this and that. That’s why the dinner hour starts well after 10 p.m.

At any rate, the aperitif hour ensures you won’t arrive at the table famished and wolf your way through the meal. It’s just more civilized.

An ambitious cook can go to elaborate lengths to produce an array of little bites. I’m more inclined to keep it fairly simple and usually put out just one or two easy things.

It could be as basic as whole almonds toasted with olive oil and fresh thyme leaves, which I love.

Right now, at the height of tomato season here in California, I’m making pa amb tomaquet like crazy. That’s Catalan for bread with tomato. There are many variations, but basically it’s toasted bread ― baguette or, my favorite, La Brea Bakery’s white table bread (available only at the original bakery on La Brea) ― rubbed with a halved tomato and drizzled with your best olive oil. Sprinkle on some sea salt. Serve as is or topped with a slice of jamon serrano. Or a single salt-cured anchovy filet marching down the center.

There’s always the classic melon or figs and prosciutto. Or smoked salmon. I’m not going to run out to the store to buy some, but when I cured a big piece of salmon this summer, gravlax-style, we enjoyed slivers of the fish on toast almost every night until we ran out.

If I have the time (and some Gruyere in the fridge), I’ll make gougeres, those delicate cheese puffs Burgundian winemakers often serve to show off their wines. For a festive occasion, make it Champagne and gougeres still warm from the oven.

For another toast topping, you can soft-scramble a couple of eggs with a few spoonfuls of grated bottarga and top them with a strip of scarlet piquillo pepper. As a variation, scramble the eggs with piquillo peppers and top with an anchovy. And if you’ve somehow secured a black truffle, roughly chop it and fold it into butter-rich oeufs brouilles (the French version of scrambled eggs).

Roasted eggplant, mashed with a fork and seasoned with garlic, lemon juice and olive oil makes another simple spread with triangles of warmed pita. And, of course, I’m always ready to have a plate of those pretty rose-and-white French breakfast radishes with sweet butter and sea salt.

If I have a spare half-hour, I’ll mix up some socca batter, basically chickpea flour, water and a dash of olive oil, to make the street food snack, a sort of chickpea crepe, beloved in Nice in the south of France. David Lebovitz has a good recipe in his book “The Sweet Life in Paris.” Or try panisses, chickpea cakes, from Daniel Young’s book “Made in Marseille.”

And lately, inspired by an appetizer Octavio Becerra serves at Palate Food + Wine in Glendale, California, I’ve been making sardines on toast. He’s found some wonderful sardines from Galicia in Spain and serves them in the opened tin with all the fixings ― a pile of toasts, sweet butter and sea salt as a do-it-yourself appetizer. I found the same sardines for sale at Sur la Table: Look for the blue-and-white box and the brand Matiz. They’re plump, delicious and not at all fishy. And the great thing is you can always have them on hand in a cupboard.

One more thought: It’s important to have the aperitif outdoors if at all possible ― on the balcony, the front porch, the deck, the backyard. I once wrote a story about bouillabaisse at Domaine Tempier in Bandol, France. The night began, like all French meals do, with an aperitif. Tempier’s owner and cook extraordinaire, Lulu Peyraud, led us out to a table beneath an ancient umbrella pine quite a ways from the house where she served the domaine’s fine Bandol rose with little croutons or toasts spread with her own tapenade or with the smashed livers from the fish meant for her bouillabaisse.