Customers need to hustle for one of the few tables in the dining area flush up against the cafe.

Lines for salads, soups and sandwiches run long and may even get more held up until customers learn how to navigate through one of the more complex items on the menu ― Dean and DeLuca’s Create Your Own Salad.

For those acquainted with New York’s Dean and DeLuca cafes, composing a dish from a selection of four choices of greens, 23 basic toppings, 24 extra additions and six dressings should not present too much of a challenge. To the average Korean diner, however, it might be daunting.

“The DIY salad bar is one of the very popular lunch menus and also take-out menus,” said Dean and DeLuca director Hwang Kyung-sun, 31, of New York. “To stick with that New Yorker-feel we focused on that.”

“While the concept is new to Koreans, Koreans do eat a lot of salad,” Hwang added. 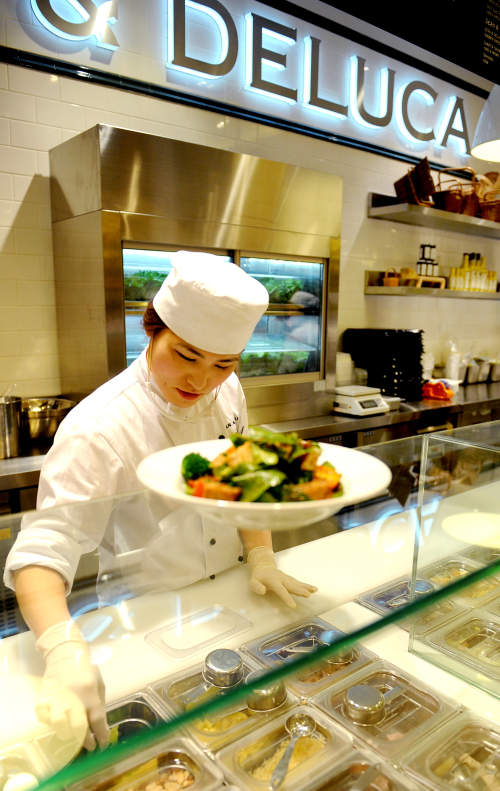 Patrons can compose their own artisanal salads at Dean and DeLuca’s first Seoul store in Shinsegae Gangnam by selecting from a vast array of toppings. The salad is assembled fresh and on-the-spot in front of patrons (Park Hyun-koo/The Korea Herald)
“It’s a good way to get creative,” said Dean and DeLuca merchandising associate Jane Kim, 32.

Well into its second week of business, Dean and DeLuca, which is located in license partner Shinsegae’s Gangnam department store branch, has attached signs to the toppings to make it easier for customers to know what is what, and, according to Kim, “We have several people there who will guide you through it.”

One can easily point to the huge chunks of beets and edamame, along with other tasty tidbits to formulate a custom-tailored salad.

After picking the greens, toppings and dressing, one can watch it get assembled on-the-spot.

Merchandising associate Kim attested to the freshness of the produce on stock, and as perky spinach gets tossed with some fragrant porcini, oven-dried tomatoes and other toppings in a tangy-sweet raspberry vinaigrette, there is no denying that it looks incredibly fresh, not to mention that being able to take part in the whole process is fun to boot.

Mexican restaurant chain Tomatillo Korea CEO Peter Chun thinks that is one of the major draws of the bespoke menu.

“You feel like it is more fresh,” Chun, 40, said. “Part of it is the experience of being able to see how fresh it is. Nothing is hidden. What you see is what you get.”

Another draw is the ability to shape your dish to fit your taste preferences.

“You can custom build your food and have it made to your own satisfaction,” said Chun. 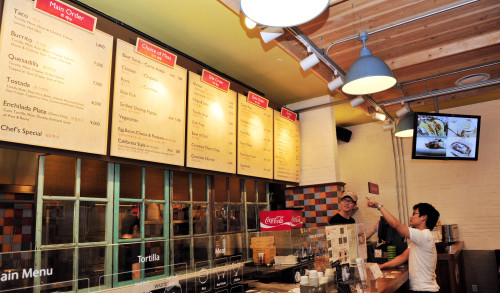 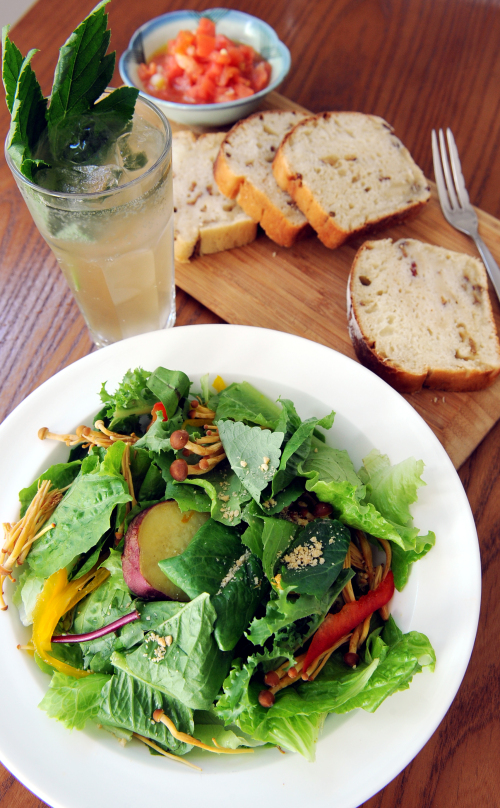 First customers would pick their main dish be it a taco, burrito or tostada or something else. Then they would pick what kind of meat, toppings and sides they wanted.

“At first men didn’t want to pick and choose,” said Chun. “Now it has gotten a lot better.”

On the flipside, female customers responded well to Tomatillo’s option-heavy menu. According to Chun, they liked being able to edit their meals and loved watching their orders get made in front of them.

“In the beginning they didn’t understand,” said Chun of their menu. “Now, they just know.”

Indeed, getting the hang of a bespoke menu can be challenging at first, but once the art of selection has been mastered, all those options can bring some major perks.

Salad + Mimi owner Chung Hui-kyong, who started serving up her health-conscious tailor-made salads, delectable makgeolli bread and enzyme beverages when she first set up shop two years ago, pinpoints diversity as one of the attractions of the custom-made menu.

“If you want you can come daily and enjoy a different salad,” said Chung, 51. “I wanted food one could eat everyday that is healthy and diverse.”

Perhaps that is why she also offers four different kinds of makgeolli bread.

Made from domestic flour, the dough is aged for over 12 hours to create a wondrously fragrant, chewy, voluminous and soft toast-like loaf.

Customers can also pick from around six enzyme beverages that have been aged for six months to three years.

Opening hours are from 10:30 to 8 p.m. from Mondays through Thursdays and till 8:30 p.m. from Fridays to Sundays. Create Your Own Salad costs 11,000 won and comes with five free toppings. To get there go to Express Bus Terminal Subway Station Line 3 which is connected to Shinsegae Gangnam. Dean and DeLuca is located on the basement floor of Shinsegae Gangnam. For more information call (02) 3479-1608 or visit www.deandeluca.co.kr

Opening hours are from 11 a.m. to 9 p.m., till 10 p.m. during the summer. The basic salad which includes three toppings costs 8,700 won. Makgeolli bread costs 5,000 won to 8,000 won, enzyme beverages 10,000 won. To get there go to Gangnam-gu Office Subway Station Line 7, Exit 3 and walk toward Hakdong Intersection for about 10 minutes. Before reaching Hakdong Intersection, turn right into the street right before the intersection. Turn left at MAO. Salad + Mimi will be to the right. Salad + Mimi will be at its current location until the end of October before moving to a new Seoul location. Salad + Mimi will be opening a flagship restaurant in Jeju Island also. For more information call (02) 548-4155 or visit saladmimi.com

There are four outlets in Korea including a newly-opened Itaewon location. The CENTER 1 outlet, where coverage took place, is located in at CENTER 1 AVENUE inside the CENTER 1 building which is connected to Euljiro 1-ga Subway Station Line 2. Opening hours are from 8 a.m. to 10 p.m. daily. Main dishes cost 3,800 won to 9,000 won. For more information call (02) 6030 - 8949 or visit www.tomatillo.co.kr