Under the agreement, MTV Korea will be re-branded SBS-MTV. Nickelodeon Korea will be the first children’s channel to be aired on SBS Media Holdings’ cable and satellite TV channels, the two companies said.

“With this venture, we will be doing more original programming including music programming that will not only benefit the Korean market but also allow us to export some of their products,” Robert M. Bakish, president and CEO of Viacom International Media Networks, told The Korea Herald after a press conference in Seoul. 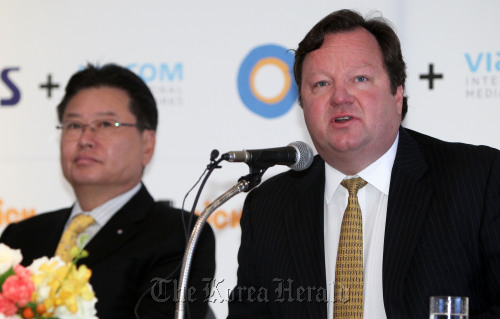 Robert M. Bakish (right), president and CEO of Viacom International Media Networks, speaks at a press conference in Seoul, Thursday. On the left is Hong Seong-wan, CEO of SBS Medianet. (Yonhap News)
“We increasingly bring services across markets to target groups of consumers who are interested in specific culture, possibly music. One of the objectives is to produce more content in Korea and use that content outside Korea.”

“That channel is available in the U.S., the U.K., Middle East and other parts of Asia,” he said.

“When the channels are launched in December, SBS is going to manage the advertising and affiliate sales operations. And Viacom will manage programming aspects of these channels,” Bakish said.

Well-known Nicklodeon programs include “SpongeBob SquarePants” and “The Penguins of Madagascar.”