Attending the ceremony, South Korean Foreign Minister Kim Sung-hwan said the trilateral body will “play a vital role” in the “systemized mechanism for peace and prosperity of Northeast Asia.”

“The idea of trilateral cooperation comes from the fact that we three countries share common responsibilities and future visions to create regional and international peace, prosperity and a sustainable future,” he said. “We must strengthen future-oriented cooperation under the principle of openness, transparency, mutual trust, common benefit and respect of various cultures, as our leaders have agreed.”

The Chinese ambassador called the three states “great influences both in Asia and in the world.”

“To strengthen trilateral cooperation will not only benefit the peoples of the three countries, but also contribute to peace and development in Northeast Asia as well as in the whole world,” he said. 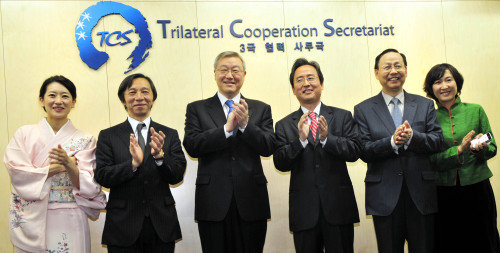 The secretariat holds significant potential in the context of Korea’s regional diplomacy and influence over the Northeast Asian economy, despite persisting issues and disputes among the three countries, Secretary-General Shin had told The Korea Herald.

Shin will serve for two years after which the post will be passed to another state.

South Korean President Lee Myung-bak first proposed setting up the permanent organization during a summit in Beijing in 2009, with an eye on such international bodies as the European Union or Association of Southeast Asia Nations.

South Korea, Japan and China forged a final agreement on the establishment of a cooperative secretariat in December, vowing strong partnership on economy and regional security issues over the next decade.

Functions of the secretariat will include administrative and technical support of the three-way summits and meetings of foreign ministers, developing and assessing new cooperation projects as well as research on major issues of trilateral collaboration, according to Seoul’s Foreign Ministry.

The three states have concluded 17 ministerial conferences and more than 50 official dialogues. A permanent secretariat will ultimately enable these disparate dialogue mechanisms to be better coordinated, thus reducing inefficiencies in the current processes, officials at the secretariat said.