Choo and Shin were ranked third and fourth with 21.8 percent and 11.2 percent. Park received 2,949 ballots from 7,982 party members and scored 39.7 percent in the public poll, according to party officials.

Park is now to compete with independent candidate Park Won-soon and minority Democratic Labor Party candidate Choi Kyu-yeop to be the sole opposition candidate on Oct. 3.

Park made her debut in politics as party spokesperson in 2004 and built her reputation as a liberal figure in the aftermath of President Roh Moo-hyun’s impeachment.

She was involved in various committees, including the party’s Free Trade Agreement special committee and the policy committee, which she currently chairs. 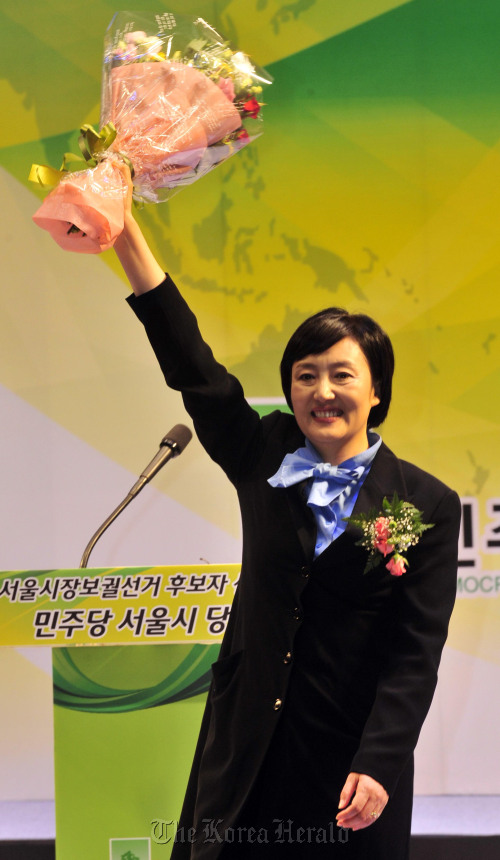 Rep. Park Young-sun of the main opposition Democratic Party waves after being elected as its candidate for the Oct. 26 Seoul mayoral by-election in Jamsil Gymnasium in Seoul on Sunday. (Kim Myung-sub/The Korea Herald)
Sunday’s race, which was the final stage of the DP’s weeks-long candidate selection, was largely regarded as a success, despite earlier concerns due to the strong public support for non-party figures such as Ahn Cheol-soo and Park Won-soon.

Though Chun announced his candidacy on Aug. 25, the day after former mayor Oh Se-hoon resigned over the free school meal plebiscite, he received little attention as entrepreneur-turned-professor Ahn was mentioned as a potential runner.

After Ahn said he would not run and would support Park Won-soon as a potential Seoul mayoral candidate, public attention and support leant toward independent candidate Park Won-soon, especially as former Prime Minister Han Myeong-sook dropped out of the race.

However, the participation of Reps. Choo and Park, both popular liberal figures, sparked public interest in the DP candidate selection.

The DP faces another obstacle as Rep. Park is to compete against frontrunner Park Won-soon to become the liberal camp’s sole candidate.

By-election candidates are to officially register themselves to the National Election Commission on Oct. 6.

“I accept the nomination rules set by the Democratic Party, without any conditions attached,” Park said after visiting the grave of former liberal President Roh Moo-hyun with former presidential aide Moon Jae-in.

According to the DP rules, a sole candidate is to be selected upon the combined result of public opinion polls, people’s votes and a professional assessment following a television debate.

However, as the DP allocates a greater portion to party members’ votes and television debates, the rules are expected to disadvantage Park, who is an independent candidate with little experience in political campaigning.

“I am aware that the conditions may be unfavorable for me, because I don’t have organization within the party, but decided to take a step back in order to break through to the tie-up,” Park said.

“The key point is not to promote the interests of a specific party or group, but to achieve opposition unity, as I promised so to the 10 million Seoul citizens.”

The ruling Grand National Party is expected to select its candidate this week, according to officials.

As Rep. Na Kyung-won of the GNP is taking a great lead over Rep. Kim Choong-whan, its race is likely to be decided by public poll results instead of a regional convention.