To showcase the largest country in Latin America, the Brazilian Embassy is exhibiting photographs by Joao Paulo Barbosa.

“There are a lot of places I have never seen before in Brazil, some places look like Grand (Canyon) National Park,” said Brazilian Ambassador Edmundo Fujita while looking at a picture that had striking similarities to one of the United States’ most beloved landmarks. 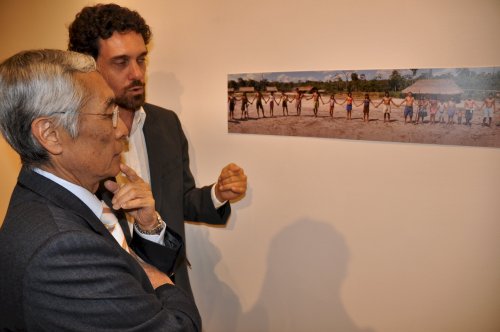 Photographer Joao Paulo Barbosa (right) explains to Brazilian Ambassador Edmundo Fujita a picture that was purchased by the Smithsonian Museum in Washington. (Yoav Cerralbo/The Korea Herald)
“Brazil Through my Eyes” presents a selection of photographs taken by Barbosa in the last fifteen years. Out of a vast collection of visual memories, he chose 50 images of Brazil that depict its wealth of natural beauty, cultural and ethnic diversity, traditions, religions, and opinions.

Barbosa said, “As I see it, Brazil is literally an illuminated place. The architecture, the flora and fauna complete my imagery of an enchanting Brazil.”

Invited by the embassy, Barbosa plans to take snapshots of different parts of Korea that are familiar and unfamiliar to even the most well-traveled Korea aficionado.

“The idea is that we will try to organize a book of pictures that show Brazil on one side of the page and Korea on the other side,” said Fujita.

The ambassador added that he hopes the photo exhibition, which runs until Sept. 29 at the Korea Foundation Cultural Center, will break stereotypes of Brazil and draw the visitor into an enchanting land worth several visits.

“Koreans are very much attached to design, so I hope this gets them closer to Brazil and helps them relate more to the country,” said Fujita.

“For me, to photograph Brazil will always be a voyage beyond time, capable of awakening one of the most difficult paths of the human being; the one from the eyes to the soul,” said Barbosa.