Seoul is set for a major shift in policy priorities, after five years under a conservative mayor who favored large construction projects aimed at giving the capital a modern makeover, while opposing universal welfare.

Be they conservative or liberal, most candidates in the upcoming mayoral by-election are vowing to get back to basics, making the city a more livable place for citizens and delivering more welfare to those in need.

Seoul citizens will vote on Oct. 26 to fill the mayoral post vacated by Oh Se-hoon, who single-handedly pushed for a series of costly and controversial projects, including one to build a canal linking the Han River and the West Sea to enable tourists to cruise from China all the way to the heart of Seoul.

Park Won-soon, a frontrunner in the mayoral race, says he would discontinue the ongoing canal construction and drop other costly projects, and spend the money saved on welfare, the environment and education.

Lee Myung-bak ran the city from 2002 to 2006 before becoming the president of Korea. His successor Oh resigned last month only one year into his second four-year term, after his campaign to block a plan to provide lunches to all schoolchildren regardless of their families’ income failed.

“(If elected), I will implement the free school meal program without delay, after consulting with the city council and the education office,” Park said. 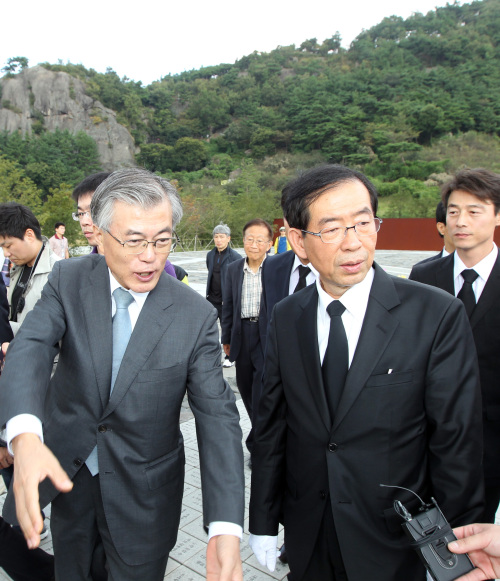 Park Won-soon (right) walks to the grave of former President Roh Moo-hyun in Bongha, South Gyeongsang Province on Saturday, accompanied by Moon Jae-in, chairman of a foundation named after the late leader. (Yonhap News)
Park, a left-leaning activist with no party affiliation, aims to become a unified candidate representing all liberal forces, encompassing civil society and opposition political parties, and end the nearly decade-long conservative grip on the capital.

The main opposition Democratic Party and minority Democratic Labor Party are moving to field their own mayoral candidates before unifying them.

Runners in the parties’ own nomination races are all critical of Oh’s costly projects, although most are yet to unveil their vision for city management.

On the conservatives’ side, Rep. Na Kyung-won, a leading contender for the ruling Grand National Party’s mayoral ticket, also stresses a return to the basics. 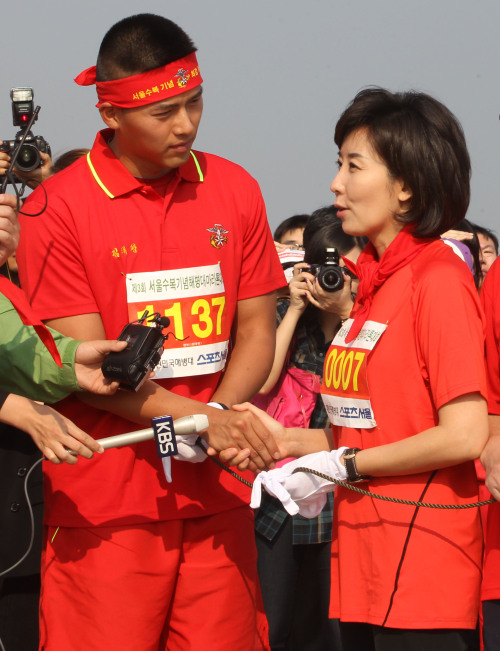 Rep. Na Kyung-won of the Grand National Party (right) shakes hands with Hyun Bin, a former actor currently serving his military service in the Marines, during a marathon event in Yeouido, Seoul on Sunday. (Yonhap News)
“I would cut the budget for show-off events like festivals and will review unproven development projects, taking into consideration the opinions of citizens and experts,” she said.

On school meals, the second-term lawmaker said she would discuss the matter from square one with the city council and the education office, apparently retreating from her initial opposition to the universal benefit plan.

“Previous mayors have done a good job in upgrading the hardware of Seoul. Rep. Na will unveil her vision to improve the city’s software, focusing on welfare, education and overall quality of life,” an aide to Na said.

Lee Seog-yeon, an independent candidate backed by right-leaning civic groups which rallied behind Oh’s bungled plan to limit free lunches to poor students, said he would do his best to plug the city’s budget holes.

“I wouldn’t do things like demolishing and building something new,” he said.

“Providing school lunches to all students is not such a big deal, if the city cuts unnecessary expenditures,” he added.